The process of hypothesis testing can be simplified into :

: Null Hypothesis, the hypothesis that nothing is going on; no effect; no signal.

: Alternative Hypothesis, the hypothesis that

you are saying that there is more noise than signal. When you reject

) you are saying that there is more signal than noise. Usually you are interested in the signal (also known as an “effect”) so your claim would be

. You perform your experiment to find evidence for

. If you are interested in noise (can happen, for example to test assumptions on which tests are based) then your claim would be

should be the claim to emphasize the logical nature of the decision making process. But test statistics are signal to noise ratios and in real life you will be interested in signals.

To fix ideas about hypothesis testing, we’ll first look at hypotheses on the means of populations (

With means there are three combinations of

is a given number. Not that the rightness or the leftness of the one-tailed test is reflected in

is generally what people are interested in. Then the critical regions, which are on

distributions as we’ll see, for each case look like : 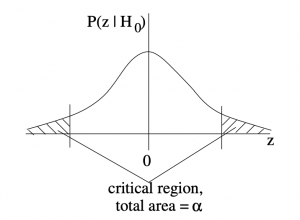 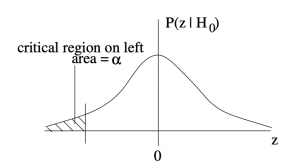 The critical regions, or rejection regions, appear in the probability distributions

, which is the probability distribution that the sample test statistic,

, that would occur if

-transforms of the distribution of sample means under

given by the central limit theorem. More about this when we introduce the formula for the

distribution. For now, let’s focus on the decision making process.

When your statistic ends up in the critical region, you conclude that

is false. You reject

. The critical region is the rejection region.

In the two tailed test, the critical region, with total area

is the opposite to the region

that we have been using for confidence intervals. Compare the two-tail critical region sketch above to Figure 8.1.

There are four possible outcomes to a statistical hypothesis test given by the so-called[1] “confusion matrix” :

is the reality. We will see how to compute

in Chapter 13. The quantity

is defined as the power of the statistical test.

We can view the confusion matrix from a medical test point of view. A medical test is a hypothesis test has the following hypotheses pairs :

In medical tests, the quantity

is known as the test’s specificity, the probability of finding true negatives. The quantity

is the test’s sensitivity, the probability of finding true positives. Generally

are functions of some other decision parameter. In the hypothesis tests that we consider here,

is the decision parameter.

Back to understanding the meaning of hypothesis testing. As we said, a good experimental design will be set up so that

is your favourite theory that there is an effect. In that case

represents the case that there is no effect : the position of

away from 0 (in the case of hypothesis testing of

) is just due to noise. If your experiment is then successful in proving your theory, i.e. you reject

represents the probability that you are wrong. The number

. Later we will see how to compute a value,

, that is associated with the test statistic. This

. From another point of view,

would be the probability that your measurement is entirely due to noise.

-distributions with hypothesis testing on the mean,

(a) Left-tailed test with 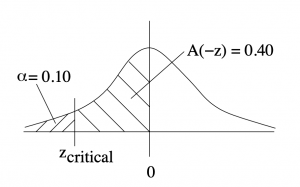 With the tables we have in the Appendix, there are two ways to find

Use Method (b) on tests and exams. It is faster, requires less thinking about areas (and so less chance for making a mistake) and gives a slightly more accurate result. The critical area or critical region or the rejection region is where

. The critical value that defines the region in this case is

(b) A two tailed test with 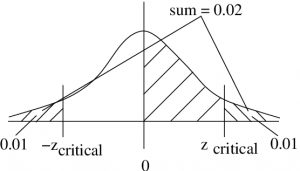 Again, Method (b) is the recommended approach.

So the critical areas are those where

and the critical values are

(c) A right tailed test with 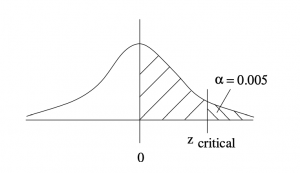 So the critical area is that where

and the critical value is

, one of the two alternatives will be the claim (what the problem says you really want to test). As mentioned before, a good experimental design will have

as the claim. But this may not always be possible to arrange (especially in tests of assumptions). So many of the exercises in the text and assignments will have