The median sign test is a test of a null hypothesis about the median, MD, of a population based on the binomial distribution. To use the test, every subject is assigned a score of

depending on whether their data point value is greater than, the same as or less than the

Since the test is based on the binomial distribution, there are two cases we need to consider. One for small samples and one for large samples where the

approximation to the binomial distribution can be used.

). Here the test statistic is

and the critical statistic,

comes from the Sign Test Critical Values Table for a given

as defined for case 1, the test statistic is

the critical statistic is

is in the critical region.

There are 3 sets of hypotheses about the null hypothesis median,

test the conjecture that the median snow cone sales is 40.

Reduce the data to

for a two-tailed test find

There is enough evidence to reject the claim that the median number of snow cone sales is 40.

We wish to test the claim that the median lifetime of manufactured rubber washers is greater than or equal to 8 years. We are given the following data from a sample of 50 washers :

Label the washer that last longer than 8 years with a

and the others with a

for a one-tailed test we find 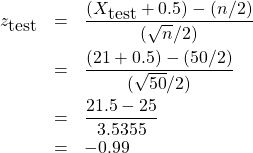 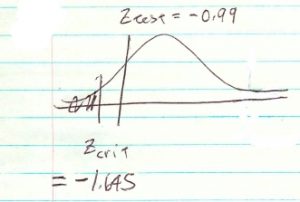 , to say that washers last less that 8 years.