The correlation is always a number between

) equals 0 then that means there is no correlation between

Example 14.1 : Compute the correlation between

for the data on Section 14.1 used for the scatter plot.

, first make a table, fill in the data columns (on the right of the double vertical line below), fill in the other computed columns, sum the columns and finally plug the sums into the formula for

Plug in the numbers :

Here there is a strong negative relationship between

goes down with a fair degree of certainty. Note the

is not the slope. All we know here, from the correlation coefficient, is that the slope is negative and the scatterplot ellipse is long and skinny.

Standard warning about correlation and causation : If you find that

) then you cannot say that

or that there is and causal relationship between

at all. In other words, it is true that if

will be correlated with

but the reverse implication does not logically follow. So beware of looking for relations between variables by looking at correlation alone. Simply finding correlations by themselves doesn’t prove anything.

is assessed by a hypothesis test of

To test this hypothesis, you need to convert

values that correspond to the critical

From the t Distribution Table with

for a two-tailed test find

As a short cut, you can also look in the Pearson Correlation Coefficient Critical Values Table for

to find the corresponding 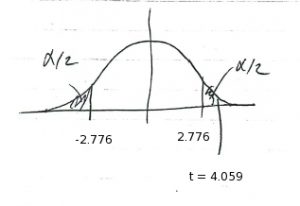 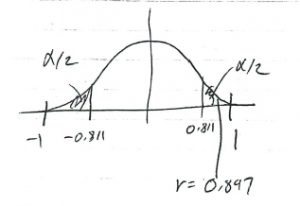 we conclude that we can reject

5. Interpretation. The correlation is statistically significant at