are taken from every subject. We could say that we measure a vector

for every subject. So any overall differences, or variances, in

due to individuals has been removed from the data.

-test, the vector is converted to a number by taking a difference. To convert vector data to difference data, make a table :

The data from the

column are what you will work with. Compute

the mean and sample standard deviation of these data. With

the procedure becomes a single sample

against zero. Specifically we can test :

Example 10.7 : A Physical Education director claims that a vitamin will increase a weight lifter’s strength. Eight athletes are selected and tested on how much they can bench press. They are each tested once before taking the vitamin and again after taking the vitamin for two weeks. We want to test the director’s claim at

Here we have listed the differences which is actually part of step 0 of the solution. The

columns are what you enter into SPSS as your independent variables. With SPSS you never see the differences.

by entering the difference data into your calculator.

Note that a negative difference, based on

(always consistently give population 1 priority if you want to stay out of trouble without thinking), indicates an increase in strength. It is important to interpret positive or negative differences correctly by thinking about what they mean.

Using the t Distribution Table with the column for one-tailed tests,

(We added the negative sign because this is a left-tailed test.)

-value, from the t Distribution Table, 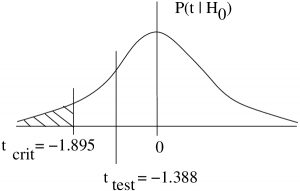 , the is not enough evidence to conclude that the vitamin increases strength.