In Section 9.4 we covered a one-sample test for proportions using the

approximation to the binomial distribution. Here we want to compare a proportion

in one population with

in another population, a two-sample test for proportions, also using the

approximation to the binomial distribution. Define

are their sample sizes. Also define the corresponding

. The hypotheses we want to test is

which is equivalent to

are the proportions of items of interest and not of interest in the two samples combined.

Example 11.1 : In a nursing home study we are interested in the proportions of nursing homes that have vaccination rates of less than 80

. In a sample of 24 large nursing homes, 17 were found to have a vaccination rate of less than 80

) line in the column for a two-tailed test at 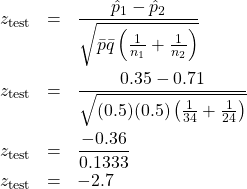 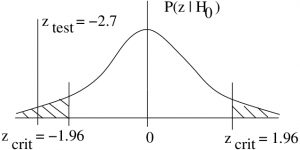 There is enough evidence, from a

in a one-tail test allows us to believe the direction of difference given by the sample data.)