17. Overview of the General Linear Model

At its most abstract level modern mathematics is based on set theory. Functions,

, are maps that map an element in a domain set,

The range of of

, the set of all possible values of

. Note that the range is a subset of the target, in set notation symbols:

is the dimension of the vector space. Some examples :

= the set of real numbers = the number line :

= the set of all pairs of real numbers written as a column vector.

We have introduced some set symbol notation here. The basic notion for a set uses curly brackets with a dividing line:

The dividing line | is read as “such that”, and the set symbol

is read as “belongs to”, so you would read the set defining

above as: “the set of column vectors such that

belong to the set

The transpose of a column vector is an operation written as 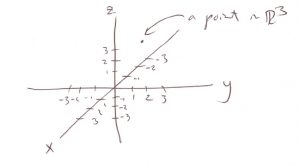 In general we have

Notice that we are using the symbol

to abstractly represent a column vector.

In general we can define maps,

We will use the following abstract notation for a map:

A linear map or a linear transformation is a map that abstractly satisfies :

). What this statement says is that, for a linear map, it does not matter if you do scalar multiplication and/or vector addition before (in

, the answer will be the same. Scalar multiplication and vector addition[2] are defined as follows, using example

It turns out that any linear map from

can be represented by an

2 matrix that defines a linear map

. For example, the vector

gives us a nice compact way of writing the two equations:

Linear algebra’s major use is to solve such systems of linear equations. Let’s try some numbers in

Notice that the size of the matrix is 2

3 to give a map from

. Again this is shorthand for

Let’s look at some numbers. Say

Just like vectors, matrices have a transpose where row and columns are switched. For example

Note how, for square matrices (where the number of rows is the same as the number of columns), that transpose results in flipping numbers across the diagonal of the matrix.

matrix can be multiplied with a

matrix to give an

matrix. For example, we can multiply a

matrix to give a

) matches the number of columns in the second matrix — the

‘s kind of cancel to give the resulting

Matrix multiplication represents a composition of linear maps. In the above example the situation is:

Note that the matrix on the right is applied first. (If you wanted to apply the matrices to a vector in

, you would would write the vector on the right.)

When you multiply two square matrices

to see that the results are different.

From an abstract point of view, a set of p vectors

are said to be linearly independent if the equation

has only one solution:

When vectors are linearly independent, you cannot express one vector as a linear combination of the other vectors. Geometrically (for example in 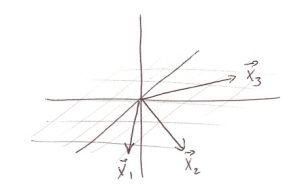 are all in the same plane then they are not linearly independent. In that case we could find

dimensional space it is possible to take, at most, a set of

Row rank = the number of linearly independent row vectors in a matrix.

Column rank = the number of linearly independent column vectors in a matrix.

It turns out that:

has rank = 1 because one column is a multiple of the other:

has rank = 2 because there is no way to find

For some square matrices (

it is possible to find an inverse matrix,

is the identity matrix that has 1 on the diagonal and 0 everywhere else.

Again, we won’t learn how to compute the inverse of a matrix but it is important to know that an

will have an inverse

if and only if rank

In general a system of linear equations can be represented by

represents the known values and