is rejected in a one-way ANOVA, you will frequently want to know where the differences in the means are. For example if we tested

-tests. But such an approach is no good because the assumed type I error rates,

-tests would be wrong. The

rate would be higher because in making such multiple comparisons you incur a greater chance of making an error.

and we will look at the Bonferroni approach.

Doing multiple comparisons after an ANOVA is known as post hoc testing. It is the traditional approach for comparing several means. The opening “omnibus” ANOVA lets you know if there are any differences at all. If you fail to reject the ANOVA

then you are done. Only when you reject

do you put in the effort of comparing means pairwise. This traditional approach, designed to minimize the necessary calculations, is not the only way to compare multiple means. The other approach is to forget about the ANOVA and then use

degrees of freedom in the dataset. Here we will stick with the traditional approach.

The test statistic for the Scheffé test is

) but with a pooled estimate

of the common population variance

given by the value of

from the ANOVA. In other words

uses information from all of the data to estimate

instead of from just groups

-test would (see Equation 10.5). Note that the Scheffé test does not require equal group sizes

are the ANOVA degrees of freedom. The critical statistic is the same for all pairwise comparisons regardless of the sample sizes,

, of the pair of groups being compared.

Example 12.2 : The ANOVA of Example 12.1 found that at least one of the three means was different from the others. Use the Scheffé test to find the significant differences between the means. There has to be at least one.

Collect the necessary information from the omnibus ANOVA. We’ll need:

There are 3 hypotheses pairs to test :

One value for all three hypothesis tests:

There are three of them: 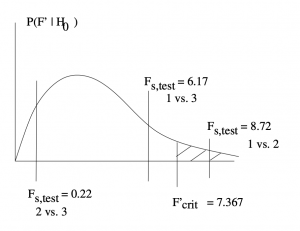 The results of the Scheffé test at

conclude that only the mean numbers of interchange employees between toll roads 1 and 2 are significantly different.

The test statistic for the Tukey test is

is from the omnibus ANOVA,

is the mean of group

and we must have equal sample sizes for all groups:

. There is a Tukey test statistic for unequal

, and it is used by SPSS, but we won’t cover that here.

, comes from a table of critical values from a new distribution called the

distribution. The critical values are tabulated in the Tukey Test Critical Values Table. To use this table, you need two numbers going in :

. In this case we don’t have a picture of the

distribution handy (although it is basically the absolute value of

rule similar to how we use the

Example 12.3 : Repeat Example 12.2 using the Tukey test instead of the Scheffé test.

We use the same data from the omnibus ANOVA :

The 3 hypotheses pairs to test are the same :

Use the Tukey Test Critical Values Table. Go into the table with

Again, there are three of them :

. This only happens for one hypothesis pair : For

The results of the Tukey test at

conclude that only the mean numbers of interchange employees between toll roads 1 and 2 are significantly different. (Same result as the Scheff

test. Usually this happens but when it doesn’t, you need to use some kind of non-mathematical judgement.)

A more conservative (less power) approach to multiple comparisons (post hoc testing) is to use Bonferroni’s method. The fundamental idea of the Bonferroni correction is to add the probabilities of making individual type I errors to get an overall type I error rate.
Implementing the idea is simple. Do a bunch of

-tests and multiply the

-value by a correction factor

. There are a number of ways to choose

(you will have to dig to find out which method SPSS uses). The easiest (and most conservative) is to set

equal to the number of pairwise comparisons done. So if you have

is given by the binomial coefficient:

Another way is to look at the total degrees of freedom,

, associated with the pairwise

-tests and compare it to the total degrees of freedom in the data,

(or one could argue

, we will not do Bonferroni post hoc testing by hand. However, be able to recognize Bonferroni results in SPSS, treating the value of

as an SPSS blackbox parameter.