The Kruskal-Wallis Test is a non-parametric one-way ANOVA. It detects differences in means between groups. The distribution behind the test is a new discrete distribution called the

distribution that assumes the group samples come from populations with identically shaped distributions. We will use a

for computing the critical statistic so, for that approximation, we need

is the number of groups. The hypothesis tested is :

: means of groups all equal

: means of groups not all equal

As mentioned, the critical statistic is

degrees of freedom which we can find using the Chi Squared Distribution Table.

The test statistic is :

The test is always right-tailed.

Example 16.8 : With the following data on ml of potassium/quart in brands of drink, determine if there is a significant difference in the potassium content between brands.

We need to rank the data. Ranking “in place” we have :

: no differences in means between the brands

From the Chi Squared Distribution Table with 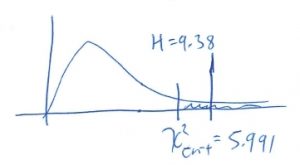 At least one of the brands is different. Since

is far less than the rank sums of the other two brands, we know that Brand A is different before we do any kind of post hoc testing.