The runs test is a test for randomness. All statistical tests require random samples so this test may be used to check that a sample has been randomly collected.

Definition : A maximal succession of identical (typically letters) in a sequence of values is a run.

Example 16.10 : How many runs are there in each of the following sequences?

Count the runs. In this table you can see a bit of highlighting to help visually separate the runs.

If there are only 2 possible values for the outcome then the runs test can be used to test :

The critical statistic is

from the Number of Runs Critical Values Table. We need

for each choice of

= the number of runs in the sequence.

Example 16.11 : Determine if the following sequence is random :

(number of F values) and

: Sequence is not random.

From the Number of Runs Critical Values Table with

Note that there are 2 values. Think of them this way : 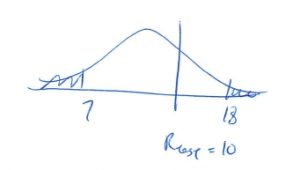 we cannot say that the sequence is not random.

We can use the runs test to test if a sample was selected from the population at random. To test if we have a random sample — the fundamental assumption behind every statistical test. Let’s see how that works in the next example.

Example 16.12 : Was the following data collected at random? (Note that in order for this test to work, the data need remain in the order they were collected.)

First we need to convert this sequence to one with 2 values. Use the median to do that. The median can be found (by putting the numbers in order as usual) to be 27. Assign a

to the values above the median and a

to those below, discard values equal to the median :

Now let’s do the hypothesis test :

: the values came at random.

From the Number of Runs Critical Values Table using 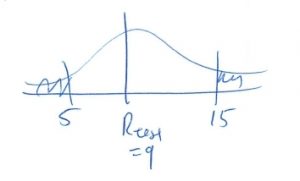 The sequence appears to be random.