Here we have to assume that the two populations (as opposed to sample mean distributions) have a distribution that is almost normal as shown in Figure 10.2. 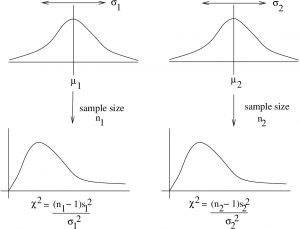 distribution has two degrees of freedom: one for the numerator (d.f.N. or

) and one for the denominator (d.f.D. or

). So we denote the distribution more specifically as

ratio, in general is the result of the following stochastic process. Let

be random variable produced by a stochastic process with a

be random variable produced by a stochastic process with a

distribution. Then the random variable

will, by definition, have a

The exact shape of the

distribution depends on the choice of

distribution as shown in Figure 10.3.

statistic can be viewed as a special case of the

) and not standard deviations (

where (for finding the critical statistic),

, a fact you can use to get a feel for the meaning of this test statistic.

Values for the various

The F Distribution Table gives critical values for small right tail areas only. This means that they are useless for a left-tailed test. But that does not mean we cannot do a left-tail test. A left-tail test is easily converted into a right tail test by switching the assignments of populations 1 and 2. To get the assignments correct in the first place then, always define populations 1 and 2 so that

. Assign population 1 so that it has the largest sample variance. Do this even for a two-tail test because we will have no idea what

on the left side of the distribution is.

Example 10.3 : Given the following data for smokers and non-smokers (maybe its about some sort of disease occurrence, who cares, let’s focus on dealing with the numbers), test if the population variances are equal or not at

so we’re good to go.

Use the F Distribution Table; it is a bunch of tables labeled by “

” that we will designate at

, the table values that signify right tail areas. Since this is a two-tail test, we need

. Next we need the degrees of freedom:

So the critical statistic is

With this test statistic, we can estimate the

17 are the closest in the tables so use those) in all the the F Distribution Table and form your own table. For each column in your table record

value corresponding to the degrees of freedom of interest. Again,

for a two-tailed test. So make a row above the

. (For a one-tailed test, we would put

Notice how we put an upper limit on

was larger than all the

values in our little table.

Let’s take a graphical look at why we use

in the little table and

But in a two-tailed test we want

split on both sides: 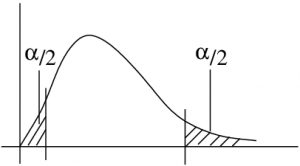 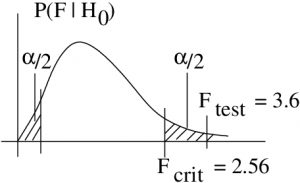 There is enough evidence to conclude, at