We have two populations and two sample sets, one from each population :

The population means are

and just as with the single population test, there are 3 possible hypothesis tests :

The test statistic to use, in all cases[1] is

= sample set size from population 1 and

= sample set size from population 2. This test statistic is based on a distribution of sample means as shown in Figure 10.1.

is there enough evidence to support the claim?

is true on the face of it. If

is not true on the face of it then

is just plain false without the need for any statistical test. With the hypotheses direction set correctly, the question becomes: Is

From the t Distribution Table, one-tailed test at

is positive because this is a right-tailed test. For left tailed tests make

negative. For two-tailed tests you have

Using the Standard Normal Distribution Table, we can find the 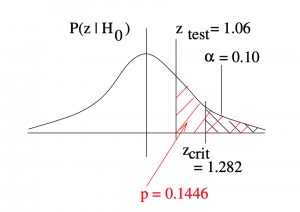 is not in the rejection region. The

-test, to support the claim that colleges offer more sports for males than females.