The results of the derivation given here may be used to understand the origin of the Normal Distribution as a limit of Binomial Distributions[1]. A mathematical “trick” using logarithmic differentiation will be used.

First, recall the definition of the Binomial Distribution[2] as

is the probability of success,

is probability of failure and

items without caring about the order of selection. Here

is a discrete variable,

is a discrete variable) for the Binomial Distribution and

we need to come up with a way to let

represent the Normal Distribution with mean

. We will show how

where each Binomial Distribution

The heart of the trick is to notice[5] that

This is perfectly true for the density

. The trick is to substitute the distribution

. The trick is to now pretend that

is a continuous function defined at all

; we just don’t know what its values should be for non-integer

. With such a “continuation” of

. We need to transform

in such a way to gain control on

(getting it to shrink as

) and to get something that converges. To do that we introduce

and a new variable

. With this transformation of variables, the chain rule gives

and the RHS of Equation (5.8) becomes, using 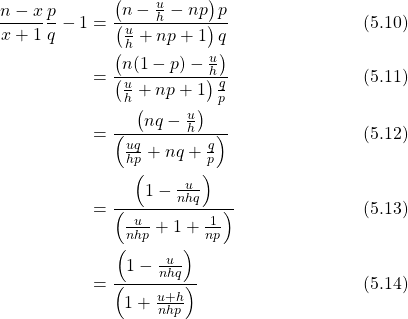 , and we have used the relation

Our transformation, with its

, has given us the exact control we need to keep the limit from disappearing or blowing up. Integrating Equation (5.20) gives

is the a constant of integration. Switching back to the

To evaluate the constant of integration,

to be a probability distribution. So

You may be wondering why that transformation

back to have a mean of zero (by subtracting

from running off to infinity and, more importantly, allows us to define a function

that has a constant variance of

that we can match to

when we transform back to

, see Figure 5.1. Looking at it the other way around, the Normal Distribution[7]

is an approximation for Binomial Distribution

This is not the only way to form a probability density limit from a sequence of Binomial distributions. It is one that gives a good approximation of the Binomial Distribution when

is fairly small if the term

in Equation (5.18) becomes small quickly. If

is very small, this does not happen and another limit of Binomial Distributions that leads to the Poisson Distribution is more appropriate. When

are close to 0.5 or more generally when

then the Normal approximation is a good one. Either way, the density limit is a mathematical idealization, a convenience really, that is based on a discrete probability distribution that just summarizes the result of counting outcomes. Counting gives the foundation for probability theory.