17. Overview of the General Linear Model

In abstract form, the GLM is

is the least squares solution

In terms of the linear algebra that we just reviewed,

(known as the pseudo-inverse) transforms the data vector

) that presumably explains the data.

We can express the linear regression model

in GLM format as

Note, importantly, that the design matrix is

…where the second column is composed of the IV values,

is the prediction vector

and the components of

are clearly the deviations

written out explicitly for this linear regression case is (without going into the calculation details):

…and this is exactly the solution for

that we saw in Section 14.5: Linear Regression.

and we found that

In GLM format this all is:

The model for multiple linear regression with 2 IVs is:

To see how to cast this model in GLM format, let’s take an

becomes (note the form of

again is given by[1]

. This is a prescription for deriving the regression formulae but we won’t dive into the details.

The design matrix (the model) again maps the

to a parameter vector

. As with all these GLMs, the dimension of the parameter space

is smaller than the dimension

of the data space. Up until now we have been considering

dimensional subspace of the data space that is the noise space. Now we can start to see the signal and noise concepts again. We can also call the parameter space the model space or the signal space so that the

-dimensional data space is composed of a

-dimensional signal space and a

-dimensional noise space. Perfect data would lie in the signal space but in reality the data vector has components in the noise space — it has

degrees of freedom for generating random noise. We’ll briefly look at this aspect of data space again in Section 17.2.4.

There are two ways to formulate a GLM design matrix for one-way ANOVA. It depends on whether the grand mean is explicitly included in the model definition or not. The two model definitions are :

2.) Without the grand mean:

corresponding to each case.

The first column of 1’s is for the grand mean and the last three columns are coding vectors for the groups. SPSS uses the GLM setup in its programming. When you enter data for a one-way ANOVA into SPSS, you enter an IV vector that looks like:

Such a vector is not in GLM form so SPSS takes your IV vector and, behind the scenes[3], produces the 3 coding vectors:

given above in the GLM, and setting

…which, with matrix multiplication, expands out to

is the grand mean of all the data (

is the mean of group

Case 2 : Without the grand mean.

only contains coding vectors. Using that design matrix in the GLM explicitly for our small example with

Expanding this to the vector components gives:

Let’s work through a numerical example.

…we set up the GLM explicitly without the grand mean : 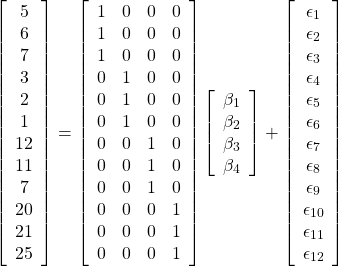 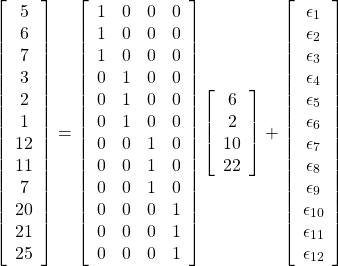 Exercise 1 : Do the matrix multiplication and compute

with the grand mean and compute

Hint: in that case

will be the same as in Exercise 1.

In all GLM cases the inferential statistics (the

values) come from an analysis of the

error (or residual) vector. Roughly, the approach begins with the observation that

. The error vector has

degrees of freedom. Then we consider a variance[5] that has the form

statistics describe how the component values of

will be distributed if

In an ANOVA set up, for example, we can do post hoc testing using contrast vectors[6],

, and use the following formula for the

must be the version without the grand mean and

is the parameter vector associated with

(all zeros usually). As examples of contrast vectors, if we have three groups then:

There are similar formulae for

that use the GLM matrices and vectors.