-test to compare more than 2 groups. (Actually an independent samples

-test and an ANOVA with two groups are the same thing). The hypotheses to be tested, in comparing the mean of

groups, with a one-way ANOVA are :

The following assumptions must be met for ANOVA (the version we have here) to be valid : 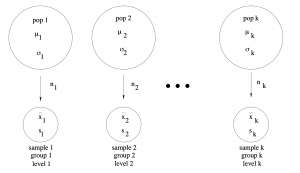 with the total number of data points being

or 0). The groups comprise different values of one IV. The IV is discrete with

In raw form, the test statistic for a one-way ANOVA is

are the degrees of freedom you use when looking up

in the F Distribution Table and where

is the variance between groups, and

is the variance within groups. Here

are the sample size, mean and standard deviation for sample

is the grand mean:

So you can see that ANOVA, the analysis of variance, is about comparing two variances. The within variance

is the variance of all the data lumped together, just as the grand mean

is the mean of all the data lumped together. It is the noise. You can see that the within variance is the weighted mean (weighted by

) of the group sample variances — a little algebra shows that this is the variance of all the data lumped together. The between variance

a variance of the sample means

. It is the signal. If the sample means were all exactly the same then the between variance

would be zero. So the higher

the more likely the means are different.

is a signal-to-noise ratio. If the means were all the same in the population then

distribution. Thus if the population means were all the same (

distribution which has an expected value[1] (mean) of about 1.

must be sufficiently bigger than 1 to reject

The analysis of the variances can be broken down further, to sums of squares, with the following definitions[2] :

Next we note that

Computer programs, like SPSS, will output an ANOVA table that breaks down all the sums of squares and other pieces of the

, reported by SPSS as “sig” for significance.

is significant (you can reject

. You should be able to reconstruct an ANOVA table given only the SS values. Notice that the total degrees of freedom of the ANOVA is

is the degrees of freedom for sample standard deviation

Example 12.1 : A state employee wishes to see if there is a significant difference in the number of employees at the interchanges of three state toll roads. At

is there a difference in the average number of employees at each interchange between the toll roads?

Use the F Distribution Table with

; do not divide the table

(right tail area) by 2 in this case, there are no left and right tail tests in ANOVA. The degrees of freedom needed are 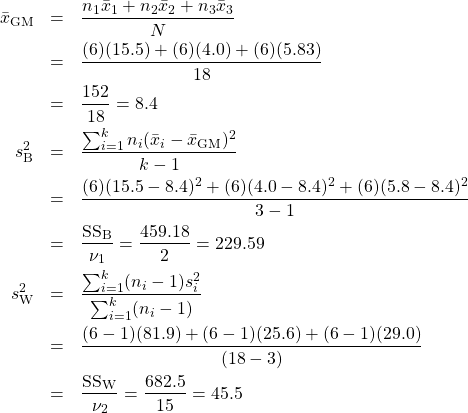 Note how we saved

for the ANOVA table. And finally 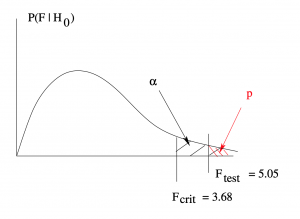 we found that at least one of the toll roads has a different average number of employees at their interchanges. The ANOVA table is :

We did not compute