Looking at the picture we see that

Remember that variance is the sum of the squared deviations (divided by degrees of freedom), so squaring the above and summing gives:

is the least square solution and

Dividing by the degrees of freedom, which is

in this {\em bivariate} situation, we get:

It turns out that

is called the coefficient of determination and gives the the fraction of variance explained by the model (here the model is the equation of a line). The quantity

appears with many statistical models. For example with ANOVA it turns out that the “effect size” eta-squared is the fraction of variance explained by the ANOVA model[1],

Here is a graphical interpretation of 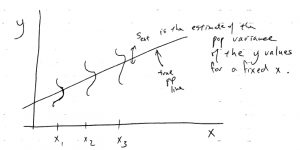 The assumption for computing confidence intervals for is that

(and they are assumed to be normal) and

is the pooled estimate of that variance.

Squaring both sides of

Working on that cross term, using

was used in the last line.