In comparing the variances of two populations we have one of two situations :

These terms also apply when there are more than 2 populations. They either all have the same variance, or not. This affects how we do an independent sample

-test because we have two cases :

Then the test statistic is :

This is the same formula as we used for the

-test. To find the critical statistic we will use, when solving problems by hand, degrees of freedom

This choice is a conservative approach (harder to reject

test statistic for this case and the degrees of freedom in Equation (10.3) is know as the Satterwaite approximation. The

-distributions are strictly only applicable if

. The Satterwaite approximation is an adjustment to make the

In this case the test statistic is:

This test statistic formula can be made more intuitive by defining

as the pooled estimate of the variance.

is the data estimate for the common population

is the weighted mean of the sample variances

. Recall the generic weighted mean formula, Equation (3.2). The weights are

and we can write the test statistic as

is clearly a standard error of the mean.

statistics have the form :

Remember that! Memorizing complicated formulae is useless, but you should remember the basic form of a

We will use the

test to decide whether to use case 1 or 2. SPSS uses a test called “Levine’s test” instead of the

test we developed to test

test statistic. It is a different

but you interpret it in the same way. If the

is high (larger than

-value is low (smaller than

.
In real life, homoscedasticity is almost always assumed because the

-test is robust to violations of homoscedasticity until one sample set contains twice as many, or more, data points as the other.

Given the following data summary :

. If that wasn’t true, we could reverse the definitions of populations 1 and 2 so that

So the question is to decide between

a two-tailed test. But before we can test the question, we have to decide which

test statistic to use: case 1 or 2. So we need to do two hypotheses tests in a row. The first one to decide which

statistic to use, the second one to test the hypotheses of interest given above.

Test 1 : See if variances can be assumed equal or not.

(Always use a two-tailed hypothesis when using the

test to decide between case 1 and 2 for the

(from the F Distribution Table)

-test question. But that is not necessary. You can use

in general; the consequence of a type I error here is small because the

-test is robust to violations of the assumption of homoscedasticity.)

Assume the variances are unequal,

Test 2 : The question of interest.

From the t Distribution Table, with

, and a two-tailed test with

line, find the values that bracket 0.57. There are none, the smallest value is 0.711 corresponding to 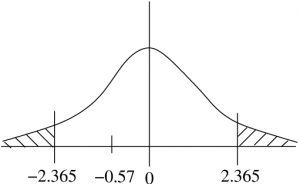 is not in the rejection region so do not reject

. The estimate for the

with the independent sample

-test, to conclude that the means of the populations are different.

First confirm, or change, the population definitions so that

. This is already true so we are good to go.

Test 1 : See if variances can be assumed equal or not. This is a test of

. After the test we find that we believe that

. So we will use the case 2, equal variances,

-test formula for test 2, the test of interest.

Test 2 : The question of interest.

reflects the face value of the data, that private nurses appear to earn more than government nurses in the population — it is true in the samples.) 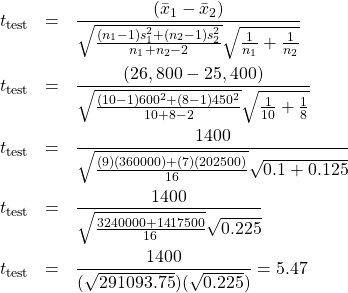 -value, look at the

is less than the

associated with the largest number 2.921 whose

is in the rejection region and

, there is enough evidence to conclude that private nurses earn more than government nurses.