This is our first hypothesis test. Use it to test a sample’s mean when :

The possible hypotheses are as given in the table you saw in the previous section (one- and two-tailed versions):

In all cases the test statistic is

In real life, we will never know what the population

is, so we will be in the second situation of having to set

test statistic as we’ll see. So taking it to be a

-test, no matter how large

is. So keep that in mind when solving a problem by hand versus using a computer.

Let’s work through a hypothesis testing example to get the procedure down and then we’ll look at the derivation of the test statistic of Equation (9.1).

, test the claim that assistant professors earn more than $42,000/year (on average). The standard deviation of the population is $5230.

(This is a right-tailed test.)

-test will be the same for the

Draw a picture so you can see the critical region : 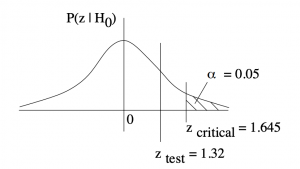 is in the non-critical region: Do not reject

There is not enough evidence, from a

, to support the claim that professors earn more than $42,000/year on average.

So where does Equation (9.1) come from? It’s an application of the central limit theorem! In Example 9.2,

on the null hypothesis of a right-tailed test. The central limit theorem says that if

is true then we can expect the sample means,

to be distributed as shown in the top part of Figure 9.1. Setting

means that if the actual sample mean,

ends up in the tail of the expected (under

sample or the null hypothesis,

, is not true. In taking that second option, rejecting

on the lower picture defines the critical region of area

(in this case). It corresponds to a value

on the original distribution of sample means, as given by the sampling theory of the central limit theorem, is equivalent, after

-transform of the data value

, must be true on the face value of the data. That is, if we substitute the value of

into the statement of

(for the test of means) then it should be a true statement. Otherwise,

is statistically true. Another way tho think about this is to think of

as a fuzzy number. As a sharp number a statement like “

is fuzzy because of

to get the fuzzy number idea). So “

” may not be true when

is considered to be a fuzzy number[1]

statement in one-tailed tests. This equality is the strict

under all circumstances but we use

statements simply because they are the logical opposite of

statements. So people may have an issue with this statement of

pair and the fact that hypothesis testing is about choosing between two well-defined alternatives.

The critical statistic defines an area, a probability,

-value or (by SPSS especially) the significance. The

-values using CDFs. So when you use a computer (like SPSS) you don’t need (or usually have) the critical statistic and you will make your decision (step 4) using the

-value associated with the test statistic according to the rule:

The method of comparing test and critical statistics is the traditional approach, popular before computers because is is less work to compute the two statistics than it is to compute

. When we work problem by hand we will use the traditional approach. When we use SPSS we will look at the

-value to make our decision. To connect the two approaches pedagogically we will estimate the

-value by hand for a while.

Solution : This calculation can happen as soon as you have the test statistic in step 3. The first thing to do is to sketch a picture of the

-value so that you know what you are doing, see Figure 9.2.

, we do not reject

in our decision step (step 4).

When using the Standard Normal Distribution Table to find

-values for a given

Don’t try to remember these formula, draw a picture to see what the situation is.

By culture, psychologists use

to define the decision point for when to reject

is otherwise given explicitly for pedagogical purposes. The choice of

is actually fairly lax and has led to the inability to reproduce psychological experiments in many cases (about 5% of course). The standards in other scientific disciplines can be different. In particle physics experiments, for example,

before an actual discovery, like the discovery of the Higgs boson, is announced. With z test statistics,

represents the area in the tails of the

, from the mean. The value

, from the mean. So you may hear physicists saying that they have “5 sigma” evidence when they announce a discovery.