The possible hypothesis pairs are, for variance :

For standard deviation we use the square roots of everything :

Note that we did not square root

. This is because we are using

to stand in for whatever number. That number from

will appear in our formulae as either

depending on the set up. Generally we will work with variance as we work through the problem and convert to standard deviation only in the last interpretation step if required by the wording of the question.

The new test statistic is :

comes from the sample and

comes from the number

. The degrees of freedom associated with the test statistic (for finding the critical statistic) is

. There is no mystery where this test statistic came from — this is just how

as a probability distribution is defined. So, for this test to be valid, the population must be normally distributed. The

test here is not very robust to violations of that assumption because there is no normalizing intermediate central limit theorem here.

The critical regions on the

distribution will appear as shown in Figure 9.5.

Let’s work through an example of each hypotheses pair case. In all of the examples we assume that the population is normally distributed.

Refer to Figure 9.6 as we get the critical statistic from the Chi-squared Distribution Table. As we see in that figure, we must look in the column that corresponds to a right tail area of 0.95. The row we need is for

. With that information we find

The values we need for the test statistic are

from the information in the problem. So :

At this point we can also estimate the

value from the Chi-squared Distribution Table. The

value is the area under the

to the left of

in the column headings of the Chi-squared Distribution Table refers to right tail areas. So, considering the left tail areas we know that 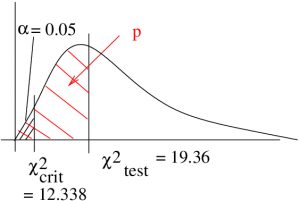 doesn’t fall in the rejection region, do not reject

. We come to the same conclusion with our

test, to support the claim that the variation in test scores of the class is less than 225.

Example 9.7 : A hospital administrator believes that the standard deviation of the number of people using out-patient surgery per day is greater than eight. A random sample of 15 days is selected. The data are shown below. At

is there enough evidence to support the administrator’s claim?

We’ll introduce a step 0 when it looks like we should do some preliminary calculations with or data. In this case we should enter the dataset into our calculations and determine

column of the Chi-squared Distribution Table, look up

value, find the bracketing values of 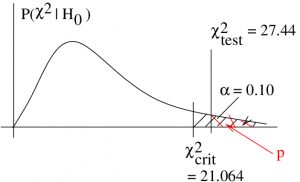 is in the rejection region. Our estimate of

leads to the same conclusion :

There is enough evidence, at

Example 9.8 : A cigarette manufacturer wishes to test the claim that the variance of the nicotine content of its cigarettes is 0.644. Nicotine content is measured in milligrams, assume that it is normally distributed. A sample of 20 cigarettes has a standard deviation of 1.00 kg. At

, is there enough evidence to reject the manufacturer’s claim?

Referring to Figure 9.7, we see that we need two

value find the bracketing value of 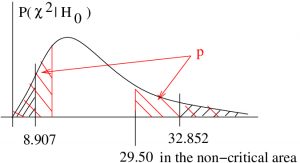 value leads to the same conclusion :

test, to reject the manufacturer’s claim that the variance of the nicotine content of the cigarettes is equal to 0.644.

Notice, with the claim on

, that failing to reject

does not provide any evidence that

is true. We just have the weaker conclusion that we couldn’t disprove it. Such is the double negative nature of the logic behind hypothesis testing that arises where we don’t assign probabilities to hypothesis.