We live on an Earth-sized and Earth-shaped world. Even if we assume away (model) size and shape (flat, spheroid, ellipsoid, or geoid), the phenomena that geographers and others are interested in studying are impossibly complex. In order to explore, examine, model, describe, and understand the world around us, we simplify, generalize, ignore, and represent various aspects of that world. For geographers an important aspect of what we study will inevitably include space. Furthermore, for anyone interested in communicating in a form other than text and numbers, space will be used in a meaningful way to compel our audience to believe our thesis. This presents a conundrum involving what we want to represent (which might be spatial or not) and how we might choose to represent it (spatially or non-spatially).

Geography is a discipline of space and place. Geographers study and use space to explore phenomena. Space influences the outcome of processes and can be used to communicate how a process results in an outcome. With such a tightly bound relationship with space, it is no wonder that representations of space and spatial representations are central to our discipline. While a map might seem the principal or logical representation employed by geographers, we also readily employ diagrams, graphs, charts, cartoons, stories, narratives, models, doodles, and representations of many other types to communicate. Furthermore, the concepts, ideas, theories, etc. that can be communicated might be spatial or non-spatial.

Reality is composed of spatial and non-spatial elements. We can use many means to define or draw attention to something’s spatial character. Take for instance the arrangement of doctors and dentists in Saskatoon; the arrangement is the central element and it is spatial, no matter what units of analysis is used (point locations, aggregations to neighbourhoods, dissemination areas, or tracts) (Aspen, Bell, Shah, & Wilson, 2012; Harrington, Wilson, Bell, Muhajarine, & Ruthart, 2012; Jones, Bell, Hayes, & Uswak, 2015). 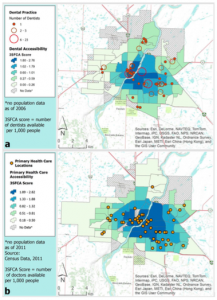 To communicate the arrangement, we could write a narrative that describes it, or we can make a map of locations of dentists and doctors. Such a map is a spatial representation of that arrangement, the narrative is not (despite the narratives ability to support the comprehension of the arrangement). We could also take that spatial arrangement and use GIS to calculate the density of doctors or dentists by neighbourhood and rank order the neighbourhoods. While perhaps not as logical (to a geographer), such a ranking would be a more efficient method of identifying the 5 densest neighbourhoods.

On the other hand, there are many non-spatial things (phenomena, process, objects, etc.) that geographers and others are interested in representing or communicating. Some of these might have aspects of space, such as topophilia, but the spatial component might not be of primary importance. Others might have very little or (shudder) no spatial component. Emotions, financial data, feelings, political opinions, attitudes, etc. are examples of non-spatial phenomena. If we take feelings and emotions as an example, there are both spatial and non-spatial representations we can use to summarize the emotion. One could summarize love or hate with words, as text or dialogue, BUT, we might also write a song or poem, or one could produce a painting. The latter would employ space (along with colour, texture, orientation, etc.) to communicate a thing that is decidedly non-spatial.

Representations are used to summarize reality so that we can focus more carefully (critically) on a specific topic of interest. Such summaries can come in many forms, some of which have been introduced above, but include many others. Novels, photographs, movies, models, equations, doodles, lists, and graphs are all examples of methods of summarization or representation. Not only are the forms of representation seemingly unlimited, but that which they can be used to represent are also myriad. A hand drawn map of the countries of the world, represents not the world but the “artist’s” rendering of what they know (Bell & Archibald, 2011; Golledge, Bell, & 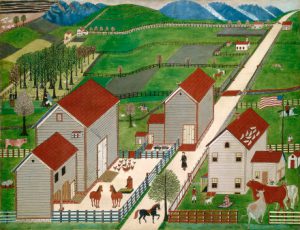 Dougherty, 1994). A story describing the harvest season on a farm would necessarily  have to describe several spatial components of the process of bringing a crop in from the field, but the representation used would be text, not something that is itself spatial and would therefore not be a spatial representation (beyond the order of letters to form words, sentences, and paragraphs). A painting of the farm would freeze in time the spatial arrangement of farmhouse, barn, and yard, requiring the careful use of the spatial extent of the canvas and hence be a spatial representations.

Representations of Space and Spatial Representations by Scott Bell is licensed under a Creative Commons Attribution 4.0 International License, except where otherwise noted.