Cartography is a form of communication. The communication is largely visual and relies on various, but stringent, application of rules and guidelines. While language is a less visual form of communication, it is useful to use the concepts of grammar and syntax as they relate to cartography. Unlike language, maps and cartography involve iterative and complex decisions about what to include on the map and how is should be included. Using a variety of tools, such as colour, shape, and pattern in combination with the unalterable spatial relationships of the geography being mapped, the cartographer can compose a meaningful and communicative representation. Additionally, by treating cartography as communication it allows us (students, cartographers, researchers, etc.) to tap into the rich knowledge associated with the semantics of communication.

Syntax: how sentences are laid out in order to create grammatical sentences

Semiotics: theory that sumarizes the relationship between reality, reference and those things that represent reality (signs)

Semantics: relationship between a sign (or symbol) and that which it signifies

Unlike many other forms of visual and graphical communication, cartographers are limited by the need to accurately portray the geography of the part of the world being mapped. Furthermore, they need to use established coordinate systems, map projections, and restrict their map to a scale that is reasonable for the spatial extent being mapped and the format of the media being used to display the map. Maps can be displayed in a variety of sizes, from a section of a relatively small-paged book to a wall mounted map several feet in dimension. When combined with the geographic extent of the area being mapped (a city, state, province, country, etc.) and that area’s shape, the scale of the final product might be constrained, leaving the cartographer little flexibility.

Maps are symbols, maps are composed of symbols, therefore maps represent a form of symbolic communication. Furthermore, maps are simplifications of reality. The nature of this simplification is multifaceted and complex. A single map employs a cartographic scale to establish the quantitative relationship between the representation and what is being represented. Once a scale is put in place, the cartographer can set about making decisions about what to include on the map and how to include it, keeping in mind that a theme or topic and spatial extent (area of study) has been set. The unit of analysis might not yet be established, but based on the area of study and theme, it has likely been constrained.

When creating maps we must simplify geography, both its spatial and non-spatial aspects. In chapter 1 (Intro to Geomatics) the concept of combining spatial and non-spatial data to create geographic information was introduced. The non-spatial aspects are generally simplified into variables for which data is recorded. Each variable contains values that are a summary for a spatial entity (like an enumeration area, province, or neighbourhood, but the spatial entity doesn’t have to be an area). As a result, a social phenomenon (affluence, poverty, health, etc.) is summarized in a way that can be assessed and then assigned a value. That value is considered data. The value doesn’t have to be numeric, but it can be. The amount and type of information that is present in a piece of data is referred to as its Level of Information, there are four levels of information: Nominal, Ordinal, Interval, and Ratio, these are summarized below. The spatial/geographic components of what is mapped is also simplified. We’ve already seen (generally) how cartographic scale, geodetic datums, and map projections simplify reality, but cartography also simplifies the geometry of geography. Features that are “drawn” on a map are drawn as points, lines, or areas (even if they are not recorded as such in a database). By associating the spatial and non-spatial we have enough information to map geography.

Nominal Information: Data is put into classes with distinct labels or names (nom); classes have no relationship to one another and are given no relative value (eye colour is an example). Nominal data is categorical and is not numeric. A common dilemma with nominal data occurs when the categories are recorded as numbers, it is important to distinguish between numbers that represent nominal categories and cannot (should not) be treated as numbers (added, subtracted, considered larger or smaller based on their numeric value).

Interval Information: Data is given a value that is based on a fixed scale with no true zero value (arbitrary zero). Interval data may appear as though it can have complex operations performed on it, such as performing a ratio, division, multiplying, etc., but this is not true (i.e. 10˚C is not twice as warm as 5˚C).

Ratio Information: Data exists on a scale with a constant interval between values and has an absolute 0. Ratio data can be multiplied by a constant, have a ratio applied to observations, and support complex analytical operations.

Symbology of Levels of Information 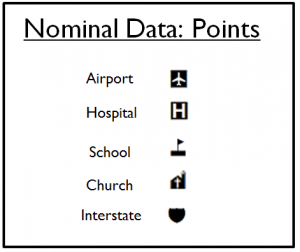 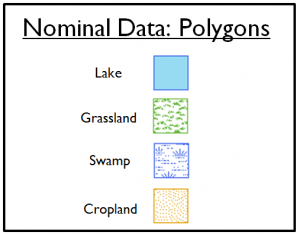 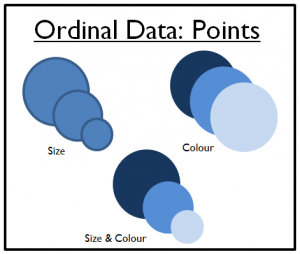 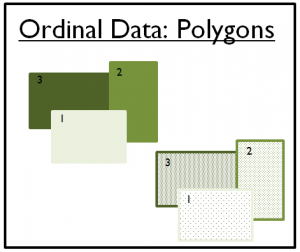 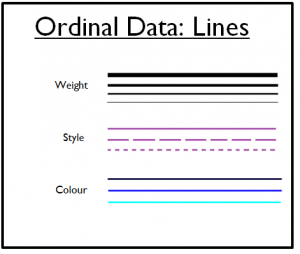 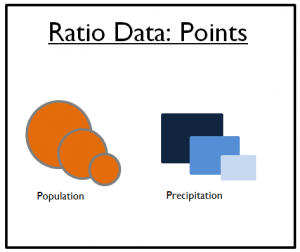 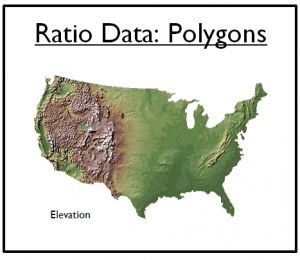 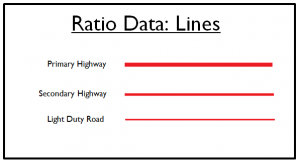 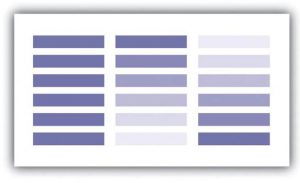 Summary of the Levels of Information

The amount of information stored in the data.
Nominal: categorical data (colour, group, nationality, etc.) i.e. bib number in a race
Ordinal: relative value (more, less, greater, smaller) i.e. finishing place in a race
Interval: quantitative difference between data points (no absolute zero, difference can be calculated but ratio cannot) i.e. difference between first finisher and yourself; Celsius and Fahrenheit
Ratio: ratios can be calculated, i.e. ratio of your time to finish race with that of your competitors; Kelvin