(The first two paragraphs of this section are from Campbell and Shin, Essentials of GIS)

Maps are among the most compelling forms of information for several reasons. Maps are artistic. Maps are scientific. Maps preserve history. Maps clarify. Maps reveal the invisible. Maps inform the future. Regardless of the reason, maps capture the imagination of people around the world. As one of the most trusted forms of information, map makers and geographic information system (GIS) practitioners hold a considerable amount of power and influence (Wood 1992; Monmonier 1996).Wood, D. 1992. The Power of Maps. New York: Guilford., Monmonier, M. 1996. How to Lie with Maps. Chicago: University of Chicago Press. Therefore, understanding and appreciating maps and how maps convey information are important aspects of GISs. The appreciation of maps begins with exploring various map types.

So what exactly is a map? Like GISs, there are probably just as many definitions of maps as there are people who use and make them (see Muehrcke and Muehrcke
1998).Muehrcke, P., and J. Muehrcke. 1998. Map Use. Madison, WI: JP Publications. For starters, we can define a map simply as a representation of the world. Such maps can be stored in our brain (i.e., mental maps), they can be printed on paper, or they can appear online.

Notwithstanding the actual medium of the map (e.g., our fleeting thoughts, paper, or digital display), maps represent and describe various aspects of the world. For purposes of clarity, the three types of maps are the reference map, the thematic map, and the dynamic map.

Mapping is the process of making images that are accurate representations of Earth and phenomena on and near its surface, but generalized to two dimensions (flat). Accurate mapping requires precise measurements of Earth’s size and shape. From this model of Earth’s size and shape (called a geodetic datum) we can establish a frame of reference onto which themes, topics, and features can be displayed. Before a map is created from a geodetic datum, two steps are necessary: 1. a cartographic scale is applied; and 2. the surface of the geodetic datum (a sphere or ellipsoid, both three dimensional shapes) must be projected onto a flat surface. The latter step is called Map Projection. The term map projection can be used as both a noun and a verb. As a verb, it means the process of rendering the surface of a geodetic datum (of Earth) onto a flat surface; as a noun, it means the specific parameters used to establish a single representation of Earth. In GIS software, all data is recorded, stored, and displayed according to a map projection and this information is easily retrievable through the software.

Once projected, a map can be used to display any spatial extent and myriad thematic topics. The spatial extent ranges from world maps that display all of Earth, to maps of large cartographic scale that portray relatively small areas. A cornerstone of maps is that the relative and absolute arrangement of features on the map are accurate to the arrangement seen in reality. If one place is west of another, it will appear this way on a map. This accurate portrayal of spatial relationships can be deployed in other spatial representations, even those not portraying Earth or portions of it. In fact, traditional cartographic scale can be inverted to portray spatial relationships for spaces that are not visible without magnification (such as diagrams of cellular structure or atomic particles).

Once a map projection is selected and applied, and a spatial extent established, a map’s content can be portrayed. Maps can be created to achieve many goals. They can be used to communicate a thematic pattern (income variation in Saskatoon, SK), to reveal a pattern that represents an underlying relationship (water contamination that causes a disease outbreak), or simply the accurate portrayal of positions across the map without a specific theme. These three map applications represent three categories of maps, each of which provides guidance for the cartographer (map maker). These map categories are commonly termed map traditions: 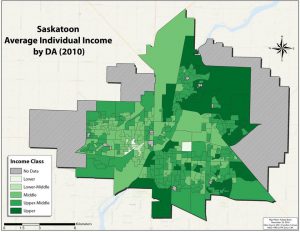 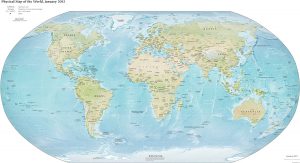 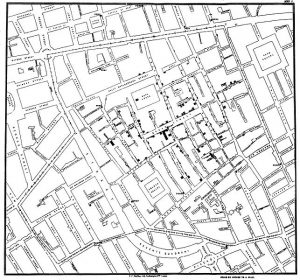 In the chapters that follow in this section, map types will be elucidated, along with the principles of map design. Map projections and Coordinate Systems will be examined in a later chapter.