Skip to content
By the end of the section, you will be able to:

Thévenin’s theorem is particularly useful when the load resistance in a circuit is subject to change. When the load’s resistance changes, so does the current it draws and the power transferred to it by the rest of the circuit. In fact, currents everywhere in a circuit will be subject to change whenever a single resistance changes, and the entire circuit would need to be re-analysed to find the new current through and power transferred to a load. Repeating circuit analysis to find the new current through a load every time its resistance changes would be very time-consuming. In contrast, according to Thévenin’s theorem once

are determined for the rest of the circuit, the current through the load is always simply calculated as

from which the voltage drop across, and power transferred to the load are, respectively,

Equations 7.3.1–7.3.3 are easily applied, and the problem of repeated circuit analysis each time a load’s resistance changes is mainly reduced to the one-time problem of finding the Thévenin voltage

The current through the loop with

all connected in series is

By Ohm’s law, the voltage across

By our above reasoning, we therefore have

Then, by our above reasoning,

The potential difference from

was calculated as a drop in potential across

Along the parallel branch (that is, parallel from the perspective of the load connection points

along the left branch, travelling in the counter-clockwise direction there is also a drop in potential, equal to

It is important to note that perspective matters when treating components as being connected in series or parallel. Here, when determining the current through

in the open circuit, we noted that current flows through a single circuit loop with

all connected in series, and determined the current through

as the potential drop across the series combination of resistors, divided by the equivalent resistance. However, when calculating

we found that from the perspective of the connection points

are connected along parallel branches of the circuit.

The procedure used here to calculate

is the same as that which we apply to more complex circuits. When doing so, it is important to correctly account for voltage rises and drops across between the two load connection points, although to this end we do have freedom of choice in which branch to follow and can always choose the simplest path.

The circuit is the same as the one from Example 7.3.1, but with

replaced by a short. Determine 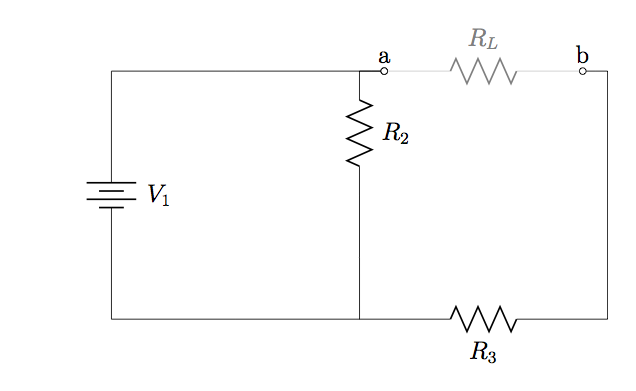 Thévenin’s theorem finds a useful application in the maximum power transfer theorem, which states that maximum power will be transferred to a load when its resistance is equal to the Thévenin resistance of the network supplying the power. This interesting and highly useful fact is easily proven by taking the derivative of Equation 7.3.3 with respect to

, setting the result equal to

, and solving for the value of

that maximises the function.

The maximum amount of power that can be dissipated in

is, by the maximum power transfer theorem, the power dissipated when

for the Thévenin equivalent circuit calculated with respect to

To find this, we first determine

replaced by an open circuit, there are two loops: one, passing through

the other, passing through

. We will calculate the current through

using Ohm’s law. Note that we do not actually need to calculate any other currents, since

the potential difference between

regardless which branch is taken.

, note that with respect to connection points

are all connected in parallel.

the current in the load is

Using the strategies developed in Mesh Analysis, we can write the matrix equations for this network as

are the clockwise mesh currents in the left and right loops, respectively.

(the actual current in

The Thévenin-equivalent voltage is therefore

Finally, the maximum power dissipated in

It is important to be clear that

is the power dissipated in

The general expression for power dissipated in