Over the next several chapters, we will be walking you through the process of creating . Reports are crucial deliverables in many technical professions. In fact, engineers can spend anywhere from 20% to 95% of their time writing reports (Leydens, 2008). That’s a lot of writing! However, it’s also important to remember that not all reports are written, as they can take an oral format as well. Before we go into the actual process of how to write a report or give a presentation, however, let’s look at reports more generally.

What is a Report?

What comes to mind when you think of the word ? If you went to school in Canada, your first thought might be one of the many book reports you did for your English classes where you had to summarize and review a book you read recently. However, since you have been in this class for a couple weeks now, maybe you’re thinking about reports in a professional/technical sense, like a business proposal or a research statement.

Before we get too ahead of ourselves, let’s consider this definition for the word report:

a transmission of any information

That definition is pretty basic, but what that tells you is that reports are happening around you all the time because, as we’ve  already learned, communication is the transmission of information. This also means that a report doesn’t just have to be written, since we also transmit information when we speak. Let’s look at a more detailed definition.

an account of your investigation into a subject, presented in a written document or oral presentation that has conventional formatting.

Something has changed with this definition. Can you see what it is? Similar to our first definition, this new definition also describes reports as an exchange of information. The difference, though, is that there is a focus on you—the writer or speaker—to share that information in a way that is accessible and relatable to your .

We’ll explain how to do that in just a moment, but let’s first review the different forms a report might take in your professional career, as well as some reports you may have already done (possibly even without realizing it). 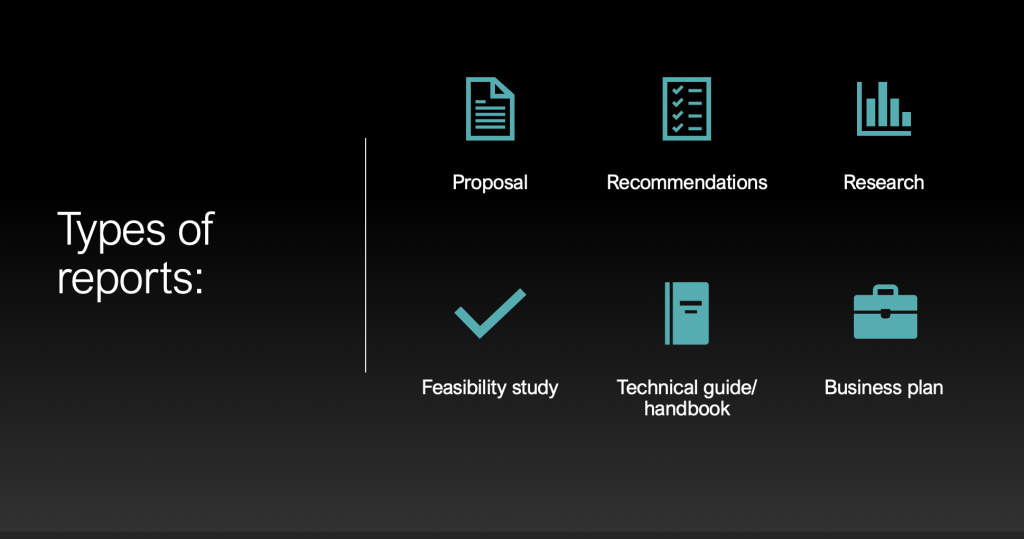 Depending on your career trajectory, you may have to do a several, if not all, of these report types.

The reason why you may be writing or presenting a report will depend on your career and need. As a result, there are a number of different reasons why you would create one: 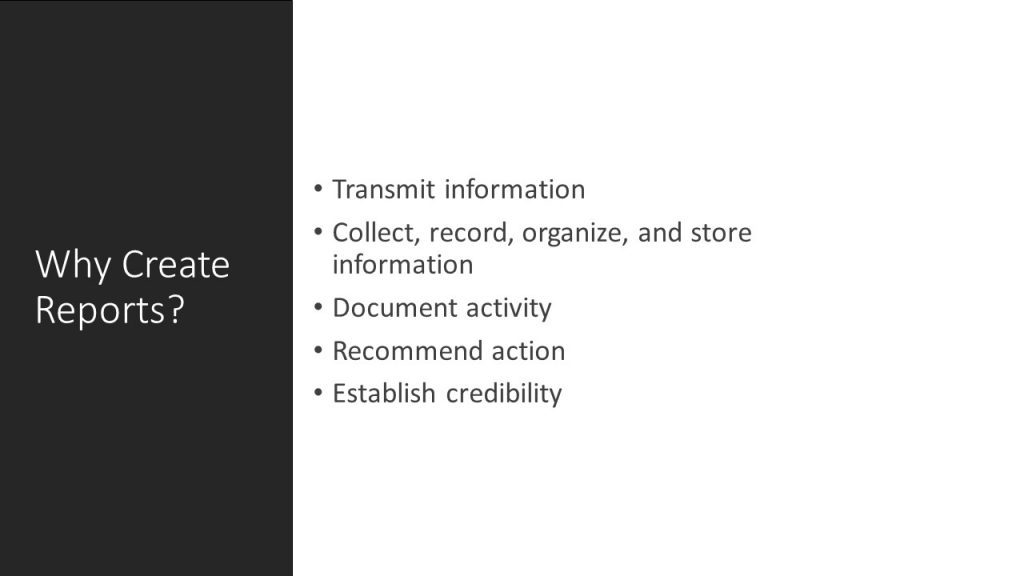 Do any of those reasons sound familiar? They should! At their core, reports are a form of , which we covered in the first chapter. Not only are they intentional, purposeful acts of communication, but they also involve making a connection with the in order to get them to change something. You’ll need to accomplish both in the formal report and persuasive presentation you create for RCM 200.

Composing a report may seem a bit overwhelming, but it’s important to realize that you have already created several reports in your life.  Of course, you may think, “That’s not true. The whole reason I’m taking the class is so I can learn how to do that!” Trust us when we say you have more experience with reports than you think.

To help you see how you have already been creating reports in other contexts, it is important to distinguish between the two types of reports.

As we have mentioned, reports can be presented either orally or in writing. However, within those two categories are range of different forms that a can take. Not only that, it’s important to recognize that reports can move on a spectrum from informal to formal.

Can you think of any informal that you’ve done? Here is an example: if you meet with your team, and a colleague asks you about your portion of the research, you might tell them about some of the resources you have found and how you plan to use them. In this case, you would be providing an update. Does this sound familiar? If you bump into a friend in the hall and have a brief chat about your plans this weekend, this is also an impromptu update.

Online conferencing happens when you meet a supervisor, instructor, or team over a platform like Zoom or Webex. Usually, such meetings take place at a scheduled time, which means there are specific topics you need to discuss. It is far less casual than running into someone in the hallway. However, even an online conference can be less formal depending on the context. If you are video chatting with friends or family in another city, or province, or even country, odds are it will be far less formal, especially if you are just catching up!

If you have ever given a presentation in front of a class, you have given a formal presentation. In such assignments, you were likely being graded, which means there was more at stake for you. Similarly, if you are the leader of an on-campus club, you might occasionally have to speak in front of your club to discuss future plans and events. While this may be less stressful because you are not being graded, you are still operating in a professional capacity, which makes the presentation more formal.

These are just some of the ways you have already given oral reports in your life. Can you think of any other examples and whether they are informal or formal?

Like oral reports, written reports can take many forms that fall somewhere on the spectrum of informal and formal.

As we have discussed, text messages are generally very brief and are best kept short. As a result, they are an informal type of written report. If someone has asked you to text them when you leave, then they are asking for a written report. Emails can also fall into this informal category as well when they are being written to friends and family. However, emails become more formal when written to either a potential employer or co-worker. As you saw in the Job Package section of this textbook, formal writing is essential if you want to convince a potential employer to hire you.

Memos and letters tend to be more formal since they are used in official capacities. However, even those will only be seen by a small audience.

Hopefully, you have a sense of how you are already creating reports in your daily life. Now, let’s review some examples of reports you may be familiar with (and some you may not be) and discuss how that writing is rhetorical in nature. While all these examples are focused on written reports, you will see  examples of a rhetorical oral report later on in this text.

A form report is what it sounds like: a form that you fill out to report something. These reports tend to be very dry and require only concise statements describing the facts. However, each still has a persuasive element.

Even though all of the above examples may appear simple, all of them have a rhetorical element that must be considered when filling them out.

Of course, all reports aren’t as dry and concise as tax forms. After all, only the most basic level of persuasion is required in order to inspire the Canadian Revenue Agency to accept how much money you owe them or for them to pay you money you that you are owed. Sometimes, however, a certain report will require you to focus more carefully on your persuasive skills in order to convince someone to do something with the facts.

In summary, reports take many forms. You have already tried some, and others you have not. Regardless, it’s okay if you are not an expert in any of them. This skill will come with time and plenty of practice. Our goal in this course is to give you the general skills you need to create effective, persuasive reports so that you can apply your knowledge to other situations.

Ultimately, in order to write a really effective report or give a stellar presentation, you will want to apply the rhetorical tools we have already discussed in this course.

How are Reports Rhetorical?

For this course, you will be creating two reports: a written formal research report and an oral persuasive presentation.

Since both of your reports will be rhetorical in nature, your ultimate goal is to persuade the audience to take action on a topic. The question is, then, how do you accomplish this in your reports? The best place is start with the rhetorical theory that we learned  from Bitzer and Aristotle. By using rhetorical theory to assess the situation and to plan a report, your message will become more persuasive.

Over the next couple of chapters, we will walk you through how to apply that theory as you construct your own reports. To help you see how this theory is applied in practice, you will see two students Mei (she/her) and Hamid (he/him) go through their own processes. Mei is working on the  report for this course, and Hamid is working on the persuasive presentation. Before they can jump into using the theory, though, they’ll need to come up with a focused topic for their .

a quality that allows others to trust and believe you