By the end of this chapter, you will be able to:

Public Speaking in the Technical Professions

As a professional, you will be making many speeches throughout your career, whether in meetings to coworkers and supervisors or in pitches to potential clients. You probably will not be surprised to see that there are many reasons why public speaking is such an important aspect of professional practice: 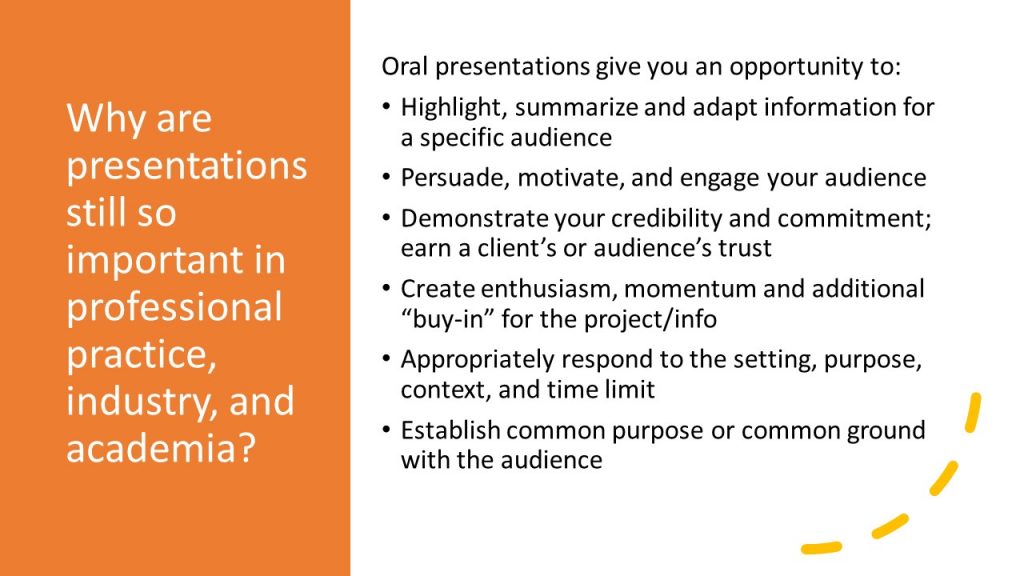 Do you notice what all of those bullet points have in common? Here’s a hint: the primary concern is not about the need to transmit information.

All of these points emphasize the importance of how we forge a relationship with our . In a professional context, this relational element is key. Of course we want to pass on information, but when we are giving speeches, we need to do so in a way that allows us to connect with our audience and make them care about or relate to our topic. The are one of the ways to do this.

A previous section of the textbook taught you about the Plan – Produce – Polish process of designing a formal .  The next few chapters will walk you through the same Plan – Produce – Polish process, but this time for an that you will give to your classmates. In the following chapters, we look at how we can design and deliver presentations in order to engage our audience most effectively.

Your research report is meant to demonstrate your accomplishments in the use of written rhetoric; the 5-minute speech is now your chance to sharpen your oral rhetorical skills. 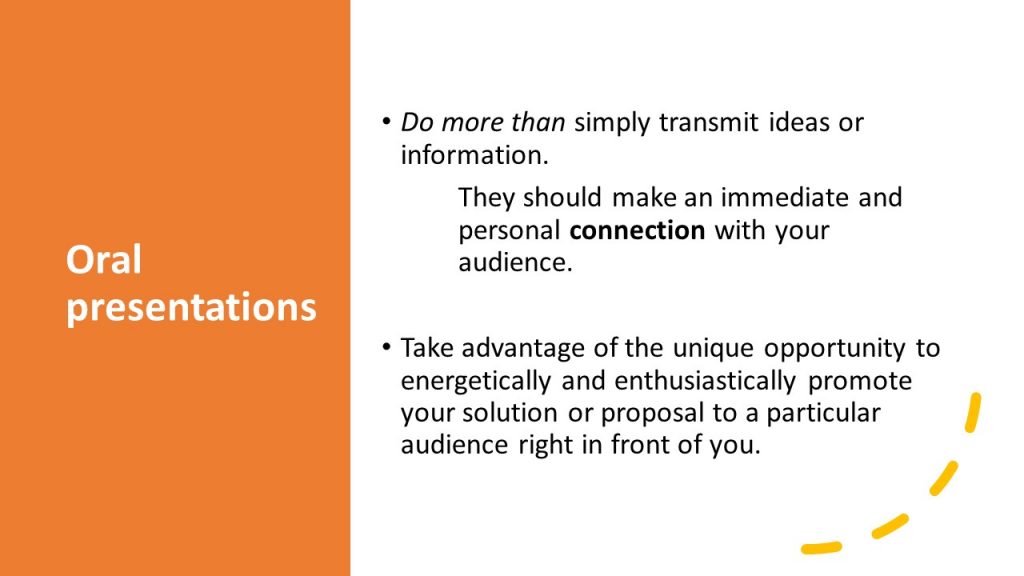 The Modes of Appeal & Your Speech

How can rhetorical theory help you connect with your audience and make them care about your topic? Once again, we will use the three modes of appeal (, , and ) to help answer that question. Aristotle considered these three modes the most important elements in a speaker’s arsenal. We will briefly review them now.

In this chapter you will also see the example we used earlier in the rhetoric and report writing chapter: Hamid’s speech on Lyme disease. Hamid’s example is here to serve as a reminder of how you might address the three when designing your own speech.

Recall that refers to the speaker’s character and expertise. When you use ethos correctly, you are showing the that you are credible and that they can believe what you say. To cover this element in your speech, tell the audience why they should listen to you. You can do this by demonstrating your authority on your topic.

For example, you could begin a persuasive speech on the dangers of drinking and driving with a short story about how you helped implement a “designated driver” program. This way the audience will understand your relationship to the message and form a positive perception of you. If you are trying to persuade the audience to donate blood, your credibility on the subject may come from your studies in the medical field or from having volunteered at a blood drive.

Hamid walks through three questions to determine his .

As you may recall, the term refers to the use of emotion as a persuasive element, in addition to how a speaker connects to the audience. You have probably seen commercials on television for charities trying to raise funds for sick children or mistreated animals, complete with sad images and music; this is pathos at work. We don’t always make decisions based only on clear thinking. We can be moved by words, by a video clip, or by a piece of music, which is also an effective way of persuading the audience to take a particular action.

Hamid walks through the three questions to determine his . It should be easy, since he has already determined her audience’s needs by considering her with Bitzer and how he will establish his credibility with ethos. Regardless, he still goes through the questions just to be sure.

As we discussed earlier, the term refers to in part to your message’s logic. To win your audience over using logic, your speech must be carefully organized and present facts and evidence. Depending on the general purpose of your speech, particularly if its goal is to persuade, you may need to present an argument. To do this, logos is key. Think about what prosecutors do during a trial—particularly during closing arguments. This is the place for facts and reason. Prosecutors will argue that the scenario they have presented is the only logical interpretation of the evidence. To use logos effectively, incorporate expert testimony, statistics, and other reliable data, and order your points carefully.

Hamid is almost done. He feels like his speech is really coming together. He goes through the final three questions to ensure his appeal is strong enough.

As a review, watch the video below on how the modes of appeal can be used to plan your speech. Afterwards, answer the questions below:

How is your Speech Different from your Report?

Does all this sound familiar at all? It should, since we already made the same points (and used similar examples) about the when discussing your formal written report. Though the format and purpose is completely different, harnessing the same rhetorical concepts and implementing them in your speech will make you successful. 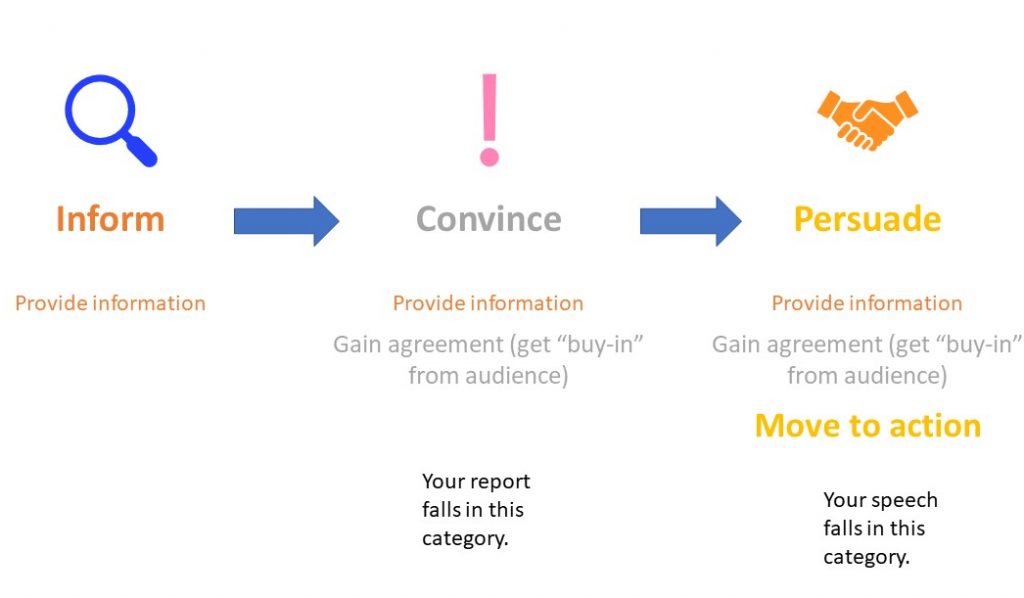 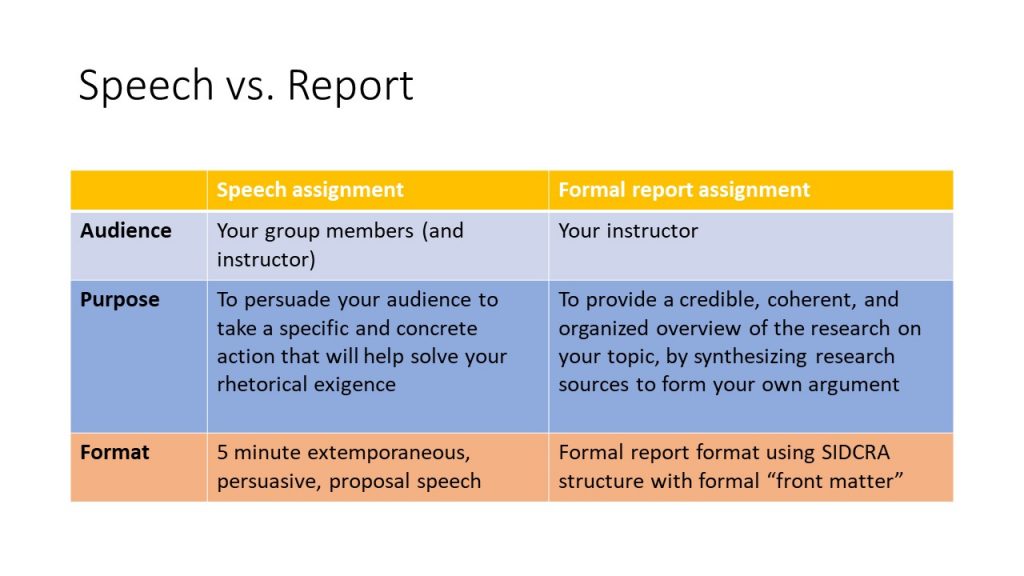 This chapter is adapted from “Professional Communications” by Olds College (on Open Library). It is licensed under Creative Commons Attribution 4.0 International License.

Aristotle's means for persuading an audience. The modes are ethos, pathos, and logos

a type of speech delivery that is carefully planned and rehearsed, but uses minimal notes and is spoken in a conversational manner

a rhetorical appeal that requires the use of logic, careful structure, and objective evidence to appeal to the audience