“Punctuation marks are the road signs placed along the highway of our communication, to control speeds, provide directions and prevent head-on collisions” (Iyer, 2001).

Consider how punctuation can change the meaning of the following :

I have two hours to kill someone come see me.

Take the sample sentence above. A period placed in the wrong place makes a huge difference in terms of the information that is communicated to the reader.

Obviously, all the above examples communicate drastically different messages. Errors like this can not only confuse readers and waste time, but can have disastrous results in cases where the writing has legal, economic, or safety implications.

The article “Comma Quirk Irks Rogers” provides an example of how a punctuation error can have real world costs and consequences. One comma error in a 10-page contract cost Rogers Communication $2 million dollars (Robertson, 2016). If you need further evidence, read about the case of the trucker’s comma that went all the way to the supreme court, resulting in a $10 million dollar payout (Nast, 2017)!

There are several helpful rules that will help you determine where and how to use punctuation, but first, it might be helpful to understand the origins. Punctuation was initially developed to help people who were giving speeches or reading aloud. Various kinds of punctuation indicated when and for how long the reader should pause between phrases, clauses, and sentences:

These “pause rules” can still offer some guidance, but they are not foolproof since there are many reasons that someone might pause while speaking. These reasons can be that the speaker simply ran out of breath, got distracted, or needed time to think of a word.

Below are some more consistent rules that you should follow to properly punctuate your sentences. These rules are presented in a numerical order to help you remember them more easily. We will start with commas, since they are one of the most common errors students make.

Commas are one of the most versatile pieces of punctuation out there. They can do many things, which means they are easy to use incorrectly. Before jumping into the five rules, here is a video that provides a quick overview. The video focuses on how commas are used with and  which you should already be familiar with.

Now let’s get to the rules.

If the subject is not the first word/phrase in the sentence, place a comma before it to separate it clearly from the introductory element and indicate clearly what the subject of the sentence is.

Take a look at the following example:

Before starting the project, we should ask the customer what they want.

The subject of the sentence is “we” but that is delayed by the introductory phrase “Before starting the project.” Including that comma helps the reader understand the meaning of the sentence by helping them identify the subject more easily.

While it is still possible that a reader will understand the sentence if the comma is left out, there are times where a comma is absolutely essential. Otherwise, the sentence will be unclear.

In the following sentence, see if you can determine what the subject is without a comma to help you:

Based on that initial design concepts will be generated.

The subject—and therefore the meaning of the sentence—depends on where you place the comma. It could go in a couple of places. If the initial phrase is “Based on that,” and “that” refers to some previously stated idea, then the sentence indicates that the subject is “initial design concepts,” and the verb is “will be generated.” Here’s what that would look like:

Based on that, initial design concepts will be generated.

Based on that initial design, concepts will be generated.

In each of the following examples, the subject of the main clause is bolded.

When you place an interrupting word, phrase, or clause between the subject and verb, if that phrase is a non-essential element, you must enclose that phrase in commas (use the “bracket test”: if you could enclose it in brackets, then you can use commas).  If the phrase is essential to the meaning, omit the commas.

The words interrupting the subject and verb are bolded in the examples below.

If you would like more information on Essential vs Non-Essential elements, and when to use “that” vs “which,”  check out this Grammar Girl link: Which versus That

Beware the “Pause Rule”—many comma rule #2 errors occur when a sentence has a long subject phrase followed by the verb “is.” People have the tendency to want to place a comma here, even though it is incorrect, simply because they would normally pause here when speaking. Below is an example of the wrong use:

The main thing that you must be sure to remember about the magnificent Chinese pandas of the southwest,  is that they can be dangerous.

In this case, a comma should not be used.

When listing a series of 3 or more items, separate the items with commas.

Whether you are listing 3 or more nouns, verb, adjectives, phrases, or even clauses, use commas to separate them. In general, do not place a comma before the first item or after the last item. If you are only listing two items, do not separate them with commas. Note what happens when you forget to put commas in the following sentence:

I love cooking my family and my pets.

The author may have intended to list three things that she loves, but without punctuation, she ends up listing two things she loves to cook. Here is the correct version:

I love cooking, my family, and my pets.

Only use the commas if there are three or more elements being listed. Make sure to list the elements in a consistent grammatical form (all nouns, or all verbs, or all using parallel phrasing).

There is some debate about whether to place a comma before the “and” used before the final listed item. This comma, referred to as the Oxford Comma since it is required by Oxford University Press, is optional in many situations. For an optional piece of punctuation, the Oxford Comma has stirred up a surprising amount of controversy!

Here’s a video that explains that controversy, if you’re interested.

Separate by placing a comma before the coordinating conjunction.

While you might occasionally omit commas if the two clauses you want to join are very short (“She drove and he navigated.”), it is a good habit to separate them with a comma for the sake of clarity.

Use commas to indicate that a non-essential sentence element (a word, phrase, or clause) follows the comma, or to signal an abrupt shift in thought.

Vampires make everyone nervous, even the bravest slayers.

I told you I need it by Wednesday, not Thursday.

Below are six sentences. Identify the rule being broken, and put commas in the correct spots (if needed).

Most people are pretty confident when it comes to rules around the comma. The semicolon, on the other hand, is another story entirely. Are they more like a comma, or more like a period? Well, the answer is that they can be work like both, depending on the situation of course!

Here’s a video that provides an overview:

Semicolons are used to link ideas when something stronger than a comma is needed. A semicolon has three main functions. Here are the first two:

Use a semicolon to join closely related into one sentence:

If the two independent clauses are closely related in content, then a semicolon may be appropriate.

Here is an example:

Scott was impatient to get married; Sharon wanted to wait until they were financially secure.

The subject in both sentences are both strongly related—indeed, in this case, they are engaged!

Use a semicolon to link two sentences joined by a (however, therefore, finally, moreover, etc.)

Transition words are a great way to connect your sentences. Here is an example:

Canadian History is a rather dull class; however, it is a requirement for the elementary education program.

You may have noticed that in both examples above, a semicolon works the same way a period does. If you could put a period there, then you can put a semicolon there—as long as both sentences are related. The semicolon simply connects the ideas more closely as part of one key idea and makes the pause between them a little shorter. 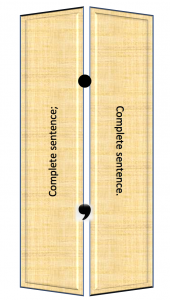 The main rule you must remember is that if you use a semicolon in this way, the clauses on either side of the semicolon must be complete sentences. You cannot use a semicolon to introduce a phrase or fragment.

Think of the semicolon as working like a hinge in a bi-fold door; it joins two complete door panels that each have their own frame together as one.

Also remember that you cannot simply use a comma instead of a semicolon to link the two clauses; doing so would result in a comma splice.

Take a look at this sentence:

The role of the vice-president will be to enhance the university’s external relations, strengthen its relationship with alumni, donors, and community leaders, and implement fundraising programs.

Was it hard to read at all? It probably was because it’s unclear what list items should be grouped together. This is where the third function of the semicolon comes in.

The role of the vice-president will be to enhance the university’s external relations; strengthen its relationship with alumni, donors, and community leaders; and implement fundraising programs.

In this case, the semicolon separates long, complex list items that contain commas within them. Without the semicolon, we have a complicated sentence that is difficult to read.

Like the semicolon, a colon is another type of punctuation that confuses a lot of people. Thankfully, it serves a simple purpose. Here is a video to review its use:

Use a colon to introduce amplification in the form of an example, explanation, quotation, summary, or list.

Keep in mind that when correctly used, colons are only placed where the sentence could come to a complete stop (i.e. you could put a period there instead).

Remember that when introducing a list, example, or quotation with a colon, whatever comes before the colon should be a complete sentence.  You should not write something like this:

Three important objectives we must consider are: x

If these clauses cannot end in a period, they should not end in a colon. Whatever comes after the colon can be a fragment or list; it does not have to be a complete sentence.

Read the sentences below. Drag and drop the correct punctuation mark into each blank.

Now that you are finished with this chapter, you can either click on one of the other sentence-level issues and learn about them, or continue on to the next required chapter.

Go To Another Topic

Fogarty, M. (2008, March 21). Which versus that. Quick and Dirty Tips. https://www.quickanddirtytips.com/education/grammar/which-versus-that-0

This chapter is adapted from “Technical Writing Essentials” by Suzan Last (on BCcampus). It is licensed under Creative Commons Attribution 4.0 International License

a group of words that are missing a subject, a verb, or both

a word that joins two clauses. These include words like and, but, for, yet, nor, or, so

a word that connects a dependent clause to an independent clause. It shows a cause-and-effect relationship or a shift in time and place between the two clauses

a clause that can stand on it's own because it conveys a complete idea.

words that are used to connect words, phrases, or sentences. Examples include: as a matter of fact, moreover, in other words, and as a result