By now, you should already have a and for your report. Now it’s time to craft your message.

As we said in a previous chapters, rhetorical theory will help you craft a persuasive message for your audience. This chapter will show you how to do that. Specifically, you will be using Bitzer’s “The Rhetorical Situation” and the Aristotle’s “Modes of Appeal” to help form a message around you focused topic and research question. Before we connect the theories to your report, we will briefly review the content in both. While both theories are distinct in the rhetorical issues they consider, when combined you will have a much stronger message. You will also notice that there is some overlap between the two in terms of what you need to consider. To help you see this in practice, you will continue to see how Mei and Hamid apply the theory to their own reports.

Please keep in mind that you are by no means locked into your focused topic and research question at this point. As you go through the theory below, you might realize that your topic is too broad or that you don’t actually want to write about it. If you need to change or refine it, that’s completely fine. What matters is that you go through this process early enough so you are realize these issues now instead of the night before the is due.

In this earlier chapter we mentioned that Bitzer’s theory was good for assessing the context of your communication situation. This is because “The Rhetorical Situation” is essentially a planning document. Before you even begin writing your message—that is, your written report or presentation—you need to consider the situation you are building your message for,  by reviewing Bitzer’s three constituents:

By considering Bitzer’s three constituents of the , you will analyze the situation before you begin to design your message and, as a result, start from a much stronger position.  Let’s look at how you might do that now.

The first constituent is . This is something needing to be done (or a problem to be solved) that can be fixed, to some degree, with the cooperation of others.

In terms of reports, if you have to write an it means you have an that needs information (which is something that needs to be done). An informative report answers that problem, but it also needs to provide information in such a way that the audience is persuaded to believe the information as credible. Keep in mind that it is not enough to just give them information; it must also be understandable.

When analyzing rhetorical exigence for your topic, do not simply stop at “the audience needs information.” Go deeper! Think about the relational issues that go on with persuading an audience.

When thinking about her report, Mei knows she should start with rhetorical exigence (the problem she wishes to solve). She thinks about her past conversations with people about nuclear energy, which she knows rarely go well.

But why? After some thought, she realizes it’s because they already have negative ideas of what nuclear energy involves. Their preconceived notions of nuclear energy is what stops them from seeing it as a safe, reliable energy source. Her audience has some she must consider in her report’s argument.

Therefore, the problem she needs to solve is to change their opinion and have them understand that nuclear energy is actually safe and reliable. However, she knows she needs to go deeper than that.

She will need to keep these constraints in mind if she is going to change her audience’s opinion.

Hamid is struggling with his topic. On the one hand, the problem is that Lyme disease is a medical issue that is becoming more prevalent in Canada; however, how does that help his ? What can they do about it?

After some thought, he realizes that if he can get the audience to be more knowledgeable and take the disease seriously, then they could save their lives. He decides that his speech’s will be to help his audience know what to look out for with Lyme disease, and the steps they can take to protect themselves. 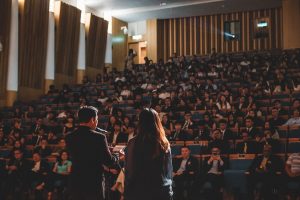 The second constituent is . This isn’t just any audience who hears the message though. Instead, a rhetorical audience must meet two criteria. They must be:

Next, Mei considers her . Since her formal written report is for RCM 200, Mei knows only a few people will read it (like her instructor and some of her peers). However, she also knows that she should take the assignment seriously. She considers the two criteria:

After going through those two questions, Mei is feeling pretty good. But she also must consider how the audience will receive her information so they can assess it as credible. Mei decides the best way to do this is by using reputable institutions that study nuclear energy to lay out a case for why it is safe and viable. She will also need to address concerns the audience has about reactor overloads and nuclear waste.

Hamid thinks about his . Unlike the formal report he wrote earlier in the term, his presentation will be in front of his entire class. That means a lot of people will see his presentation.

In order to show he is credible, Hamid knows that all of his sources will need to come from medical organizations and medical journals. Additionally, he realizes it may help if he also shares his own personal experience with the disease.

The final constituent is . Constraints always exist in any rhetorical situation. They are those elements that limit what the writer or speaker can effectively say.

As a result, when constructing your , you need to consider what will limit how you present your information.  Ask yourself these questions:

Mei considers all the that will limit her formal report.

Hamid considers all the for his persuasive speech.

“The Modes of Appeal” (Aristotle)

By now, you should have used Bitzer to determine the problem you are trying to solve, who is the audience that needs the information, and how you are going to get that information to them. Now it’s time to put that message together. We can do so by considering Aristotle’s Modes of Appeal. As a reminder, these are the strategies you can use to create a persuasive message (, , and ), which requires an assessment of:

All together, the work together to build a message that shows the of both the speaker and their message to the audience. In this section, you’ll notice discussion on sources and finding evidence. Again, we will go into more detail on that in next chapter.

Ethos is defined as the credibility of the speaker as established in the message by demonstrating good will, good judgement, and good character. This means taking stock of yourself, your position, and understanding how that may affect your message either positively or negatively.

Mei walks through the three questions to determine her .

Hamid walks through three questions to determine his .

is defined as a connection of the message to the needs, values, expectations, and wants of the . Put another way, does your message help the audience understand why the content is important to them?

Mei walks through the three questions to determine her . It should be easy; she’s already determined her audience’s needs by considering her rhetorical audience with Bitzer. However, she still goes through the questions just to be sure.

Hamid walks through the three questions to determine his . It should be easy, since he has already determined his audience’s needs by considering his with Bitzer and how he will establish his with . Regardless, he still goes through the questions just to be sure.

is defined as a well-organized, well-supported, and well-positioned argument.

When we talk about the “positioning of an argument,” we are pointing to the importance of approaching  the problem in a way that shows you understand why the audience should care. In other words, you must describe the problem and the solution in terms that are connected to the audience’s concerns.

Mei is almost done, and she’s feeling pretty confident in her appeals. She goes through the final three questions.

Hamid is almost done. He feels like his speech is really coming together. He goes through the final three questions to ensure his appeal is strong enough.

Now, with both Bitzer and Aristotle at your side,  you can begin to write a that understands the you are trying to solve, the that you are speaking to, and the message you need to design in a way that is persuasive to that particular audience (just like Mei and Hamid did).

Below you have two ways to try this out on your own. The first is a tool that will walk you through the process. By the end, you will be able to export your file to your computer. If you would rather take your time, you can download the Microsoft Word file and fill out

When creating a rhetorical message, either when writing or when creating a speech, start with Bitzer. Use his work to analyze why the audience needs the information, what the audience already knows, and what form the report—or message—should take.

Follow up with Aristotle to establish your in the report by designing a well-structured message that meets the audience’s needs in a clear and complete way.

By using your knowledge of to develop a message, you will be able to craft an effective message because you will know what its purpose is.

a specific topic for a written report or oral presentation that is neither too broad or too general.

a question that a research project sets out to answer

a "problem" that can be affected by human activity

something that makes it difficult for your message to be received, such as beliefs, facts, interests, and motives. These can from both the rhetor and the audience

also known as a "communication context," this is a complex of persons, events, objects, and relations presenting an actual or potential exigence which can be completely or partially removed if discourse, introduced into the situation, can so constrain human decision or action as to bring about the significant modification of the exigence.

a rhetorical appeal that requires the use of logic, careful structure, and objective evidence to appeal to the audience

a person sending a message through their voice

Aristotle's means for persuading an audience. The modes are ethos, pathos, and logos

a quality that allows others to trust and believe you

a practical, purposeful communication that attempts to create change in the world by enabling a rhetor to persuade people to change their beliefs or solve problems.

the foundation upon which your credibility rests in a given interaction