The names Lev Vygotsky, Stephen Krashen, and Jim Cummins may already be familiar to you. These distinguished authors and researchers have put forth several theories that transformed language education. Their work continues to influence current approaches to language teaching, learning, and assessment. It is difficult to find an educational text about language learning that does not include one of these names in the list of references!

The theories of Vygotsky and Krashen were introduced briefly in the previous module. Their work is examined in greater detail in Module 2. The theories of Jim Cummins, a noted Canadian author and language specialist, are also presented in this module. Cummins’ research, and in particular, the Common Underlying Proficiency (CUP) theory and his distinction between conversational and academic language (known by the acronyms BICS & CALP), caused language specialists to rethink approaches to language learning in the 21st century.

Born in Belarus in 1896, Vygotsky believed that students learn best when interacting with others who can be mentors or guides. As a cognitive psychologist, he stressed that students bring with them funds of prior knowledge that are a foundational base for new learning. Vygotsky believed that new knowledge needed to be linked to existing knowledge in order for students to grow in their knowledge. The process of linking prior learning to new learning was described as scaffolding in a previous module.

Scaffolding involves the assistance of a more knowledgeable other (MKO). This is someone with a better understanding or a higher ability than the student who is learning how to perform a specific task. When grandparents pass along traditions or cultural practices in the home, this is a form of cultural scaffolding. Other examples are: a) learning how to drive mentored by a driving instructor, b) learning how to play the piano guided by a piano teacher, or c) learning to bake cookies alongside a parent or older sibling. 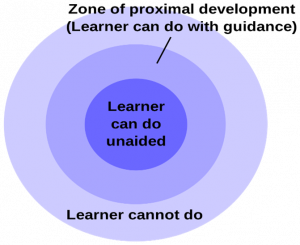 In language classrooms, the teacher, a teaching assistant, parents, older students, or peer mentors can all be excellent MKOs for language learning. The right resources, such as dictionaries, bilingual books, or simplified texts, can assist with the process of scaffolding. Access to technology and online resources such as messaging systems, translation sites, language apps, audio or video clips, and authentic broadcasts, also play an important role in moving students beyond their current level of language ability.

A scaffolded approach to choosing ‘Just Right’ reading material for language learners is shown in the infographic below. 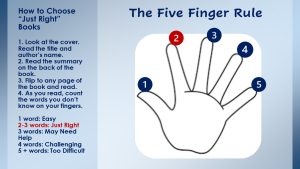 The process of scaffolding is at the heart of the ‘five finger rule’ (also known as the ‘Goldilocks rule’) for selecting reading material in the primary grades. The goal is for students to select a book that has enough familiar vocabulary to make reading enjoyable and to make the content understood. The meaning of two or three new words on a page can be gained from the broader context. These new words will expand the student’s vocabulary and learning will take place (students move up and out of the zone). However, if there are too many new words on the page, the student will not comprehend the text and learning will be hampered (students become stuck in the zone).

The term scaffolding is also called the ‘gradual release of responsibility’ or the ‘I do – we do – you do’ strategy, which means that support is gradually removed as students demonstrate the skills or knowledge to proceed independently. Some examples of classroom strategies that scaffold learning include close activities, sentence frames, writing templates, performance samples, pre-tests, peer tutoring and small group instruction.

Permission: Courtesy of Nadia Prokopchuk, Department of Curriculum Studies, University of Saskatchewan based on Coelho, E., (2012). Language and Learning in Multilingual Classrooms. p. 264.

Krashen’s Natural Approach stresses that students must have comprehensible input (Module 1 Glossary) to comprehend the language around them. Krashen introduced the term as part of the Input Hypothesis, represented as ‘i + 1’ (information that is known by the learner ‘i’, plus a new piece of information, or ‘+1’). In Krashen’s view, language acquisition takes place when known language is blended with a small amount of new language. A fluent language speaker such as a teacher, guide, or mentor helps the language learner to add the new language to their existing language storehouse in the brain. The fluent language speaker is the ‘More Knowledgeable Other’ or MKO, as described by Vygotsky (1978).

Vygotsky’s explanation of the ZPD and scaffolding can be applied to the process of learning a new language. Comprehensible input, or language that is known to the learner is based on prior knowledge. When just a few new words are added and support is available, the student makes progress with language learning. In other words, students move through the ‘zone’, the space between what a student knows and what is new. If too many new words are added, students become stuck in the zone because they no longer understand the message. Language input is no longer comprehensible. 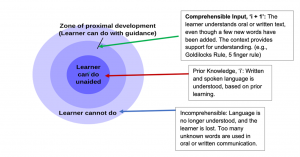 Permission: Courtesy of Nadia Prokopchuk, Department of Curriculum Studies, University of Saskatchewan, based on https://commons.wikimedia.org/wiki/File:Zone_of_proximal_development.svg

Another language researcher, Merrill Swain (1993) added the Output Hypothesis to Krashen’s Input Hypothesis. Swain believed that comprehensible input is only the first half of the process for successful language learning. Learners must also produce language in order to demonstrate their language abilities. When students produce language, they draw on their personal language storehouse in the brain. According to Swain, when students must produce language (output), they learn about their own language abilities, where language gaps exist, meaning that further learning must take place. These gaps can be linked to Vygotsky’s description of the ‘zone’. Students need to seek support for language gaps so that they can communicate with greater fluency and accuracy. When they move out of the ‘zone’, language progress takes place. From this description, it is clear that the input hypothesis and the output hypothesis are interrelated; one cannot be successful without the other.

When a student is too anxious or worried in class, negative emotions override the learning process and become a barrier to performance. Consider the case of students with ‘test anxiety’. When faced with a major exam or pressure to perform, the brain can shut down. Students may feel physically ill with stomach pains or a headache, or they may stare blankly at the questions on an exam page. Krashen’s Affective Filter Hypothesis explains this type of anxiety.

The affective filter may also affect a student’s motivation to learn. Classroom indicators may be boredom, inability to focus, or detachment. Other factors are the student age, personality features, identity issues, or language distance.

Born in Ireland, Dr. Jim Cummins completed his doctoral studies at the University of Alberta and embarked on a long and distinguished career as a professor in the Department of Curriculum, Teaching, and Learning at the Ontario Institute for Studies in Education, University of Toronto. To date, he has authored 18 books, edited 11 books, written 165 book chapters and 114 journal articles. Cummins has originated several ground-breaking theories which are described in this module. His work is quoted and referenced by many language education specialists.

Cummins (1981) earliest work on the Common Underlying Proficiency, or CUP Theory refuted earlier beliefs about languages as separate cognitive pillars in the brain. Using the image of an iceberg, Cummins proposed that the brain has a central operating system which processes information (much like today’s computer hard drive). Languages interact with one another, drawing on prior learning and concepts already established within the central operating system. At the time, Cummins’ theory was considered to be an oversimplification of the complex functions of the brain. However, his theory about the interaction of languages within the brain has proven to be true, given research studies in psychology (Bialystok, E. & Craik, F., 2010). 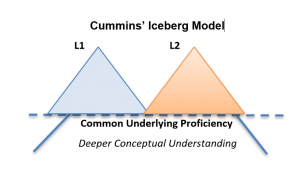 Cummins’ distinction between Basic Interpersonal Communication Skills (BICS) and Cognitive Academic Language Proficiency (CALP) has had the greatest impact on language learning around the world. His research began with a look at the challenges faced by English language learners in schools as students tried to catch up to grade-level peers who were native speakers of English. Cummins noticed that students picked up conversational language (BICS) within one to two years, but students were still not performing well on academic tasks. Students had difficulty understanding subject area texts and completing assignments. The input was no longer comprehensible; in other words, the vocabulary was beyond the students’ level of understanding in a new language. Cummins realized that language used for everyday communication was different than the academic language (CALP) required for learning subject area content at school.

In subsequent years, Cummins developed the Quadrants Model to illustrate how classroom learning can be scaffolded to make transitions from conversational to academic language (Reiss, pp 12-15).

After studying the chart of quadrants shown below, you will notice that beginner language learners and those with basic conversational skills are situated on the left-hand side of the chart, where language is very basic (cognitively undemanding) and texts contain illustrations, graphs, charts, photos or other visual cues (context-embedded). Language students working in Quadrants A and B rely heavily on the support of contextual cues to build vocabulary and to comprehend meaning.  As students graduate to Quadrant C, they have a very broad repertoire of academic language and  can comprehend more complex texts without relying on contextual cues.  Quadrant D does not add value to language learning, but it does serve a purpose for repetitive or recurring tasks. 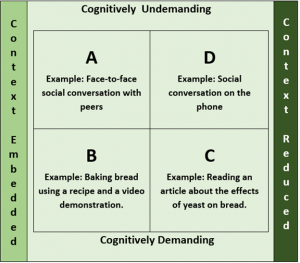 A more detailed chart of Cummins’ Quadrants and the terms used to identify the quadrants is given in Appendix A.

Affective Filter Hypothesis: Refers to the effects of anxiety on learning due to increased emotion, which becomes a barrier to learning when students feel overwhelmed, stressed, anxious, or fearful.

BICS: An acronym for Basic Interpersonal Communication Skills, the term used to describe conversational language, or the language used to carry out everyday tasks and routines.

CALP: An acronym for Cognitive Academic Language Proficiency, a term that encompasses academic language, or the language specific to schooling and subject-area learning.

Common underlying proficiency (CUP): A theory that illustrates how cognitive and literacy skills established in a first language (or mother tongue) are transferred to a new language or languages. Using the image of an iceberg, the invisible part of the iceberg represents the area of the brain that stores concepts, while the visible peaks represent two or more languages that share the same conceptual base.

Conversational language: The kind of informal, everyday language used to accomplish daily tasks and routines, and to chat with family and friends.

Gradual release of responsibility: Another term for scaffolding, meaning that support is gradually removed as students demonstrate the skills or knowledge to proceed independently. It is also called the “I do – We do – You do” instructional strategy.

Output Hypothesis: Based on language intake (as proposed in the Input Hypothesis), students must produce language (output) in order to demonstrate their full range of language abilities.

Zone of Proximal Development (ZPD): The space between what a student can do independently and what the student is not yet able to do independently, requiring help from a more knowledgeable other (MKO) to guide learning.

Manitoba Education, Citizenship and Youth. (2006). From Theory to Practice: Theoretical Perspectives and Influences. In English Language Arts: English as an Additional Language for Academic Success. A Course for Senior 4 EAL Learners. pp. 11-32. Retrieved from: https://www.edu.gov.mb.ca/k12/cur/eal/senior4/index.html https://www.edu.gov.mb.ca/k12/cur/eal/senior4/theory.pdf

Language Learning in K-12 Schools: Theories, Methodologies, and Best Practices by Nadia Prokopchuk is licensed under a Creative Commons Attribution-NonCommercial-NoDerivatives 4.0 International License, except where otherwise noted.