The terms ‘approach’ and ‘method’ are often used synonymously, but a distinction should be made. An approach is a broad term used to describe a set of beliefs or assumptions about the nature of language learning. A method (also called methodology) describes a systematic plan for language teaching that follows a selected approach. Strategies (sometimes called techniques) are actions, tasks, or activities that support a language teaching methodology. Strategies bring a selected methodology to life in the classroom.

This is by far the oldest method of language teaching, dating back several centuries. The original purpose was to translate classic literature from Ancient Latin and Greek into modern languages.

In this method, students learn grammatical features of the target language. They are given practice exercises such as grammar drills and sentence translations. The aim is for students to be able to translate with ease between two languages, usually their first or native language (L1) and the target language (L2) being learned. Students begin with basic sentence translations and progress to paragraphs and longer texts. Translation demands high levels of proficiency with written text. Students must understand both the context and meaning in order to translate messages accurately from one language to the other.

Translate the following English paragraph to another language that you know.

‘Anne of Green Gables’ by Canadian author L. M. Montgomery offers hours of enjoyable reading for pre-teens. This book recounts the life of an 11-year old red-headed orphan girl named Anne Shirley. Anne is adopted by an elderly brother and sister, Matthew and Marilla Cuthbert, who live on a farm called Green Gables. The farm is near the town of Avonlea on Prince Edward Island. Matthew and Marilla had hoped to adopt a boy to help on the farm. Instead, they receive a very  curious, outspoken, and imaginative girl. Anne brings many unexpected adventures to Matthew, Marilla, and the residents of Avonlea.

In the mid-20th century, linguists recognized that the grammar-translation method had many shortcomings. Krashen and Terrell (1983) proposed a new methodology stemming from Terrell’s belief in the Natural Approach (1977). The approach described the process of learning a new language as being similar to the acquisition of a first language in childhood. Krashen further explained that language acquisition involves spontaneous, experiential learning, and language input from many sources. Krashen added five hypotheses to Terrell’s theory.

b) Natural order hypothesis – The brain retains grammatical rules subconsciously in a natural order. Teachers should expect errors during language acquisition, knowing that rules are being absorbed naturally.

c) Monitor hypothesis – Self-correction, a kind of internal monitor, helps students to gain control of the grammatical features of language over time.

d) Input hypothesis – Students acquire new vocabulary through input that is slightly beyond their current level of language comprehension (“i +1”), guided by mentors or language speakers.

The methodology requires that teachers use only the target language, or L2, in the classroom, without references to or support from L1. The goal is to create an atmosphere of immersion, in an effort to simulate language learning in the home environment. No grammatical instruction is provided in the Natural Approach. Students model and repeat language until grammatical patterns are absorbed over time.

As students grow in their ability to communicate using oral language, they are introduced to reading and writing in L2.

The Natural Approach is dependent on comprehensible input, a term introduced by Krashen as part of the Input Hypothesis and symbolized as ‘i + 1’ (information that is known by the learner ‘i’, plus a new piece of information, or ‘1’). Comprehensible input is comparable to scaffolding as described by Vygotsky (1978). In Krashen’s view, language acquisition takes place when known language is blended with small amounts of new language. A language speaker (such as a teacher, guide, or mentor) helps the language learner to add the new language to their existing ‘language storehouse’ in the brain. Vygotsky used the phrase More Knowledgeable Other, or MKO, to describe the person providing guidance.

This method aligns well with Krashen’s hypothesis about the need for comprehensible input in language learning. The audio-lingual method promotes the notion that learning language can be simulated inside the classroom by using prescribed dialogues and texts which are comprehensible to the learners. When students are able to repeat dialogues easily, they are asked to transfer (‘transpose’) the memorized language to other situations they may encounter outside the classroom.

The audio-lingual method promotes accuracy over fluency, meaning that vocabulary is limited, but grammatically accurate. The method relies on memorization of set phrases for prescribed contexts or situations. Vocabulary-building does not extend beyond the prescribed dialogues and texts.

As with the Natural Approach, the Audio-Lingual Method proposes that students hear and use only the target language in the classroom, with no disruptions from their L1. Students are presented with a series of prepared drills and conversational sequences. They rehearse the sequences in pairs or small groups (e.g., role play, dialogues, class skits) until sentence patterns and grammatical sequences are memorized. In the initial stages, language is presented orally using audio-visual supports (e.g., audio recordings, film/video clips, pictures, props, gestures). Written language is introduced when basic oral skills have been mastered from the prepared dialogues and texts.

Memorize the text that matches each illustration, then role play with classmates using only the visuals. Three participants are required for the role play: Mr. Kozak, Roman, Taras. 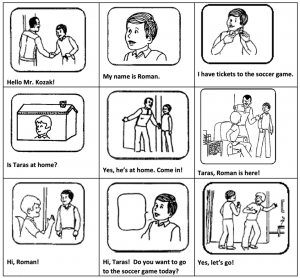 Total Physical Response, or TPR, was created by Dr. James Asher (1965). As with the theories of Terrell and Krashen, Asher believed that children learn a new language the way they learn their mother tongue. Children interact with their parents and the environment, combining actions and words for meaningful learning experiences. For example, a parent may say, “Look at me. Give me the toy.” The child will respond physically by looking and then handing the toy to the parent. These listening-responding actions continue for months until the child begins to mimic language by repeating one or two words, followed by phrases, and eventually full sentences.

TPR can be compared to games such as ‘Simon Says’ or ‘Follow the Leader’, in which participants listen for instructions and then perform the actions.

The teacher demonstrates a command-action sequence. Students are asked to listen to the command and perform the action several times. Then, together with the teacher, students repeat both the command and the action. After several choral repetitions, the teacher pulls away support (scaffolding) to allow student-led commands and actions.

TPR works particularly well with young children using learning activities such as fingerplays, action stories, and action songs. The combination of language and movement makes learning enjoyable. An extension of TPR with older learners is commonly called ‘role play’. For example, students can act out a cooking lesson, play charades, or participate in a ‘Who Am I’ game. TPR works with large or small classes and requires few props or materials. Teachers need to plan language-movement sequences carefully for best results.

Step 2: Students combine the action and statements as a choral exercise led by the teacher.

Step 3: Students repeat the actions and phrases in pairs or small groups on their own. 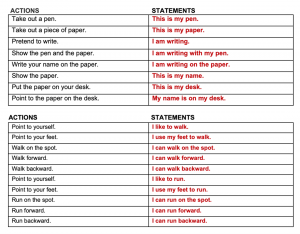 This approach grew in popularity in the late 1970s. It blended Krashen’s theory of natural language acquisition with the realization that students learn language more effectively in the classroom when communication is meaningful, purposeful, and applicable to their lives. The Communicative Approach, also known as Communicative Language Teaching, or CLT, does not adhere to one prescribed methodology. Several methodologies have been integrated into CLT, including task-based learning, immersion/partial immersion education, and integrated language and content instruction (ILCI). Other terms for ILCI are content-based instruction (CBI) and content and language integrated learning (CLIL).

Three distinguishing features of the Communicative Approach are:

In this approach, the teacher is the guide or facilitator of language learning in the classroom and students are active participants. Students gain confidence in their ability to communicate freely on various topics without feeling pressure to be grammatically accurate. Although grammar is not the central focus of the approach, it is still an important component of classroom instruction. Teachers draw attention to forms and functions of the language in the context of classroom language learning activities. Three methodologies that grew from the Communicative Approach are described below.

Full Immersion/Partial Immersion: Immersion education, in general, reflects the basic principles of communicative language teaching within the context of mainstream K-12 education. Immersion education has several delivery formats, such as partial, early, middle, and late immersion, bilingual education, and dual language education. Lyster and Genesee (2012) describe immersion education as “…a form of bilingual education that provides students with a sheltered classroom environment in which they receive at least half of their subject-matter instruction through the medium of a language that they are learning as a second, foreign, heritage, or indigenous language (L2). In addition, immersion students receive some instruction through the medium of a shared primary language, which normally has majority status in the community. (p.1) The curriculum for immersion education is cumulative in nature, with new language sequenced grade-by-grade into each subject area taught in the target language.

Integrated Language and Content Learning (ILCI). As with immersion, ILCI methodology reflects the belief that language is best learned through active use in authentic contexts. In the case of K-12 education, the context is the school classroom. Students learn to communication in the new language while also learning content in the subject areas. In other words, the classroom is used for learning language and learning content through language. The methodology promotes a combination of language objectives and content area objectives. Teachers create language objectives that target key terms and phrases needed to learn content successfully. The focus on language and content allows students to reach curriculum objectives in the subject areas.

To encourage communication in the target language, create a Word Wall using a strategy called Brainstorming. Ask students to generate words and phrases based on a picture prompt that is relevant to a topic/theme being studied in class.

Step 1: Students share words and phrases that come to mind when looking at the selected picture. The teacher writes everything down on a whiteboard, poster, or flip chart.

Step 2: Ask students to organize the words/phrases into categories. Create lists that can be displayed in the classroom (shown below). Students can refer to the Word Wall when talking, singing, dramatizing, or writing on the topic.

Step 3: Students may transfer vocabulary from the Word Wall to a personal language notebook. Remind students that they may use their L1 as a tool to help them understand and remember the meaning of new vocabulary. 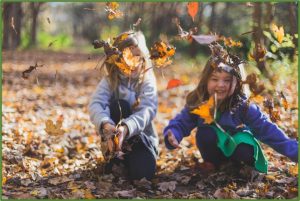 Students might contribute some/all of the words below. These words can be categorized (e.g., colours, nature, clothing, action words) and used to create a Word Wall.

Use any format to create the Word Wall. Brief video explanations are available here:

Approach: A broad term used to describe a set of beliefs or assumptions about the nature of language learning.

Interpretation: Involves oral transfer of information from one language to another, ensuring that the intended meaning is conveyed to the listener.

Productive language: The language produced (output) through speaking and writing.

Receptive language: The language received and stored in the brain (input) through listening and reading.

Scaffolding: Process of adding small bits of new information (input) to existing knowledge, guided by an individual who is a ‘More Knowledgeable Other’ (Vygotsky = MKO).

Strategies: Actions, tasks, or activities that support language instruction in the classroom as part of a teaching methodology.

Translation: Involves written transfer of information from one language to another.

McLeod, S. A. (2012). Zone of proximal development. Retrieved from: www.simplypsychology.org/Zone-of-Proximal-Development.html

Watson, Sue. (2020). How to Brainstorm in the Classroom. ThoughtCo. Retrieved from: thoughtco.com/brainstorm-in-the-classroom-3111340

Language Learning in K-12 Schools: Theories, Methodologies, and Best Practices by Nadia Prokopchuk is licensed under a Creative Commons Attribution-NonCommercial-NoDerivatives 4.0 International License, except where otherwise noted.