The provision of education for Indigenous people is a critical issue in Canadian education ‒ one that is very closely related to the broader questions of the purposes of schooling that were raised in Chapter 1, as well as to issues of authority and structure already introduced in this chapter. Legislation typically has incorporated terminology that is outdated or racialized, a point recognized by the Minister of Indigenous Services in the Annual Report to Parliament (2020). For example, the Canadian Charter of Rights and Freedoms defines Aboriginal peoples of Canada as including Indian, Inuit, and Métis people of Canada. Although “Aboriginal” and “Indian” remain legal terms, the more appropriate terminology to use is “Indigenous” and “First Nations.”

According to the 2016 Census, the Indigenous population of Canada in 2016 was 1,673,785 or 4.9 per cent of the total Canadian population. According to this survey this population was made up of 977,235 First Nations, 587,545 Métis, and 65,025 Inuit peoples.  Among the First Nations population, 820,120, or 83.9% of First Nations people identified themselves as Registered Indians and 157,115, or 16% as Non-Registered (Statistics Canada, 2016). Registered Indians (also called Status Indians) are those individuals who are registered under the Indian Act.  There are 634 First Nations communities. Figure 2.11.1 provides the population distribution of Indigenous people in Canada.  Notably, the proportion of individuals with Indigenous ancestry are found in the territories and prairie provinces of Manitoba and Saskatchewan.

Distribution of Indigenous Peoples in Canada 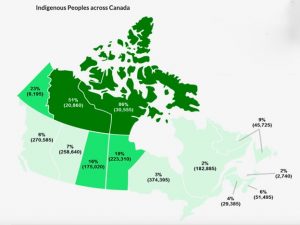 While the funding of education for registered/status Indians on reserves is provided by the federal government, providing education for the children of non-registered/non-status off-reserve Indians and Métis people is normally a provincial responsibility. As this latter population has become increasingly off-reserve, the educational needs of Indigenous students have become increasingly important issues for many school divisions and First Nations communities.

The Indian Act, first introduced in 1876 and revised several times since, provides the legal framework that has regulated the federal government’s relationship with registered Indians. It has commonly been described as one of the most racist pieces of legislation in the world, and multiple iterations later, continues to include what many claim to be racialized and sexist legislation (Day, 2018). However, because its very presence makes the federal government accountable to its fiduciary responsibility to First Nations peoples, most groups are torn with wanting to abolish the Indian Act or maintain, but change it.

Administrative responsibility has resided primarily with the federal Department of Indigenous Services. Sections 114 to 122 of the Indian Act deal specifically with schooling, though a 2019 amendment of the Indian Act subsequent to the findings of the Truth and Reconciliation Commission of Canada (2015) repealed sections or subsections related to religious schooling, truant officers (including sanctioned use of force), and forced attendance at school until age 18. Section 114 addresses the question of control over schools. It states:

a. the government of a province

b. the Commissioner of the Northwest Territories

c. the Commissioner of the Yukon Territory

(c.1) the Commissioner of Nunavut

d. a public or separate school board, and

Nowhere in this list of potential purveyors of education is there recognition given to consultation with Indigenous peoples or to the legitimacy of self-determination and self-governance of First Nations education.

The early history of the implementation of the Indian Act saw the federal government enlist the services of the churches to operate schools among Indian communities. Over the years, a number of different institutional forms were experimented with, ranging from local day schools to residential schools. Residential schools took on different forms in different contexts including industrial schools, boarding schools, student residences, and hostels. A system of residential schools existed across every province and territory except New Brunswick and Prince Edward Island, with close to 130 schools operating at its height (Truth and Reconciliation Commission, 2015). The Royal Commission on Aboriginal Peoples (RCAP) (1996) outlined the federal government’s rationale for residential schools as follows:

The tragic legacy of residential education began in the late nineteenth century with a three-part vision of education in the service of assimilation. It included, first, a justification for removing children from their communities and disrupting Aboriginal families; second, a precise pedagogy for re-socializing children in the schools; and third, schemes for integrating graduates into the non-Aboriginal world. (p. 337)

Though RCAP (1996) made numerous recommendations related to the damage done by residential schools, this major document remained virtually absent from education discussions. The damage that this school system inflicted on many students and families was well documented in the Indian Residential Schools Truth and Reconciliation Commission established in 2008 that culminated in its final report in 2015. The year that the Commission was created coincided with the acknowledgement by Prime Minister Stephen Harper in an official Statement of Apology to Former Students of Indian Residential Schools on June 11th, 2008 (https://www.youtube.com/watch?v=aQjnbK6d3oQ)

In the 1950s, the federal government began to take direct charge of Indian education and to operate federal schools. Although most residential schools ceased to operate by the mid-1970s, the last residential school, Gordon Indian Residential School, was in operation until 1996 in Punnichy, Saskatchewan. In the 1960s, under a new federal vision of Indian education, there was a movement toward integrating Indian children into the provincial school systems, either through master tuition agreements between federal and provincial governments (negotiated without First Nations consultation or agreement) or through individual agreements between the federal government and local school boards. Not surprisingly, given the complete separation and racialized interactions between Indigenous and non-Indigenous communities at that time, the integration movement was not popular, nor was it effective.  Throughout this period the federal government also continued to operate many of its own schools, and, despite changes in the ways in which federal responsibility for First Nations schooling was carried out prior to the 1970s, the education of First Nations children was sub-standard. The structure and content of residential schools and their curricula were defined and controlled by non-Indigenous peoples with a mandate to assimilate and Christianize Indigenous peoples. Second, the colonial curriculum paid absolutely no attention or respect for Indigenous cultures, languages, histories, and worldviews (in fact, it was designed to “educate the Indian out of the child”). Third, although some individuals have noted appreciation for the education they received, like reading and writing, by far and large, the experience was one of racial discrimination and physical and mental brutality perpetrated on Indigenous children (Truth and Reconciliation Commission, 2015).

Since the 1970s, First Nations communities have struggled to change the circumstances imposed on them by the federal government, asserting the importance of an education that reflects their histories, languages, values, and aspirations, and over which they alone exercise control. The National Indian Brotherhood (1972) stated clearly:

If we are to avoid the conflict of values which in the past has led to withdrawal and failure, Indian parents must have control of education with the responsibility for setting goals. What we want for our children can be summarized very briefly: to reinforce their Indian identity; and to provide the training necessary for making a good living in a modern society. We are the best judges of the kind of school programs which can contribute to these goals without causing damage to the child. (p. 3)

In 1973, the federal government stated that it was prepared to accept the principle of local control. Important steps toward that end were taken, though true sovereignty and self-determination remain unrecognized (Assembly of First Nations 2010; Auditor General of Canada, 2011; Canada, 2011). Much remains to be done to create a holistic and lifelong education relevant to the contemporary needs and aspirations of First Nations peoples. Key priorities identified in these reports include: addressing the recognized federal under-funding of First Nations school systems; developing and funding new arrangements for providing secondary and tertiary level services provided in provincial schools at the school board or provincial levels (e.g. consultants, psychologists, curriculum developers); developing and funding improved Indigenous language programs; improved teacher preparation and professional development opportunities for First Nations teachers and administrators.

In 2014, the Minister of Aboriginal Affairs and Northern Development (the precursor to Indigenous Services Canada) introduced Bill C-33, the First Nations Control of First Nations Education Act that was an attempt to create stability in the funding and operation of First Nations schools.  The proposed bill was intended to address education outcomes for First Nations children on reserve by reforming the elementary and secondary education system. Although there had been agreement between the Assembly of First Nations and federal government on the general principles underlying the bill, it did not pass the second reading.  Many First Nations chiefs claimed that the proposed Bill C-33 granted too much authority to the government that undermined First Nations sovereignty and self-determination, that it did not protect treaty rights, and that it did not offer enough resources to effectively make the necessary changes. Members of federal opposition parties also resisted the bill.  In the end, Bill C-33 was put “on hold” with little agreement on how to craft legislation that could meet the needs of all 634 First Nations across the territories of Canada.

Note. Figures may not add up due to rounding. FTE counts do not include students under self-government agreements.

No single blueprint for Indigenous self-government in education exists; indeed, a central principle of self-government is that local communities and individual First Nations should be free to develop their own plans without outside interference. Offering a model of how First Nations’ jurisdiction in education might develop into a national educational network, The Report of the Royal Commission on Aboriginal Peoples (1996, vol. 3, pp. 563–65) laid out a proposal for a four-tiered system that would involve local community, individual First Nations, multi-nation organizations, and Canada-wide networks collaborating to provide a comprehensive Indigenous education system.

Across Canada there has been innovation at the local and provincial levels. In February 1997, an agreement between the federal government, the provincial government of Nova Scotia, and the Mi’kmaq Chiefs of Nova Scotia provided the first agreement in Canada to transfer jurisdiction for education from the federal government to First Nations communities. In Manitoba and Saskatchewan, some First Nations communities have partnered with provincial school divisions to access services or administrative support.  In 2016, the federal government signed an agreement with the Manitoba First Nations Education Resource Centre for the creation of the Manitoba First Nations School System (MFNSS). The model provided provincial comparable funding, salaries, technology and services for nine First Nations and 11 schools enrolling 2200 students, with the incentive that more First Nations could opt in as the system evolved.  In Saskatchewan, Tribal Councils, Education Councils, and Education Alliances have developed where First Nations communities enter into agreements to pool resources to provide services.  In essence, these agreements create partnerships that facilitate the economies of scale necessary to offer consistent and relevant educational programming, services and administration whereby Indigenous people are self-determining what education “looks like” for their children.  Each of these alliances tend to be fluid and therefore somewhat precarious given that each First Nations considers itself an independent sovereign nation that needs to be able to serve its community interests. There remains a perennial tension between entering into agreements for the purposes of resourcing the immediate educational needs of children, versus the potential to lose the fight for the recognition of sovereignty as distinct independent First Nations.  However, as members learn how to craft agreements that recognize sovereignty and the need to self-determine within the terms of reference of the partnership, more of these agreements are being built that will help serve the educational needs of children in First Nations communities.